This early work from Roscoe “Fatty” Arbuckle while he was working for Mack Sennett doesn’t have a lot of originality, but it provides plenty of chaotic Keystone anarchy, and puts its star to good use. Crude, but effective in its way.

Fatty is talking to co-star (and his real-life wife) Minta Durfee about an ad in the newspaper. A “Grand Benefit Dance” is to be held that evening, and Minta is eager to go. Minta gives a brief demonstration of her ability to tango, and Fatty does a sort of imitation of her moves. At this point a rival, played by Harry McCoy, walks up carrying fancy-dress evening clothes. He points out to Fatty that he won’t be able to get in, because the ad reads “Strictly Full Dress.” Fatty responds with violence, knocking Harry out, which results in Minta hitting Fatty. There’s a bit more slapstick violence until a Keystone Cop (Slim Summerville) walks up and chases Harry off, throwing his clothes after him. Fatty slinks home and asks his mom to loan him 50 cents so he can hire some clothes, but she responds by bopping him on the ear. Fortunately, Harry lives next door, so Fatty just steals his clothes off the clothes line after he washes them (presumably because of the beating they took during the fight). Of course, they don’t fit, but Fatty fakes things up by drawing buttons on a towel to make it look like the shirt goes all the way down. 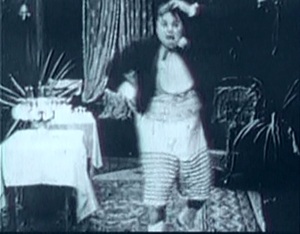 Harry can’t figure out where his clothes went, but he goes down to the dance anyway while Fatty escorts Minta. They dance up a storm, although Fatty’s antics threaten to expose his last-minute alterations. The go into another room for punch, but Harry has sneaked in here, and he recognizes his own suit on Fatty. He sneaks up behind him with a pin and loosens an already-straining seam on Fatty’s pants, then attaches a string to make sure they rip when he gets up. Fatty and Minta have a brief chat with another guest (I think this might be Charley Chase), and suddenly Fatty is pants-less! He runs about in panic while Minta and Charley laugh. He tries hiding behind the punch table, but a waiter comes in and moves it, and soon he is exposed before the whole ball. Now Harry grabs his jacket as well, and Fatty realizes what’s up. He tries to fight Harry, but Harry has a gun. He chases Fatty about the dance hall, causing more chaos along the way. Finally, Fatty escapes out the window, into the clutches of Officer Slim, who puts a barrel on Fatty in the classic method of concealing indecency, then hits him repeatedly with his billy club. 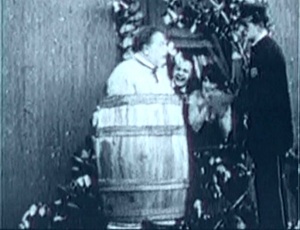 It’s Arbuckle’s physicality that really makes this movie work, from his assaults on Harry, to his pratfalls, to his tango dancing, to his running around in a panic, the movie hinges on well-timed, fast movement from the big man, and he’s fully up to it. Apart from Harry falling down once or twice, and Minta hitting Fatty, none of the other actors really even get a chance to keep up. The filming is standard Keystone, with locked-down cameras at wide shot establishing stages for the actors to work on, and the only editing is occasionally between stages, to show clothes being thrown or stolen or ripped off Fatty’s body. Fatty’s trick with the towel is hard to describe, and doesn’t seem like it would work at all in reality, but it sort of looks OK on camera, given the quality of the print and the camera’s distance from the actor. Given the set-up, I was expecting to see Fatty in drag again, as in “The Waiter’s Ball,” but this was at least different from that movie.

This short from Keystone stars two of its biggest stars after (as well as before) the departure of Charlie Chaplin: Mabel Normand and Roscoe “Fatty” Arbuckle. Both are at the top of their game, but the movie suffers from Keystone’s slap-dash approach to plot.

Fatty and Mabel are married at the beginning of the film, but Fatty is flirting with the maid, triggering a bout of violence from Mabel. Another couple is established in essentially the same situation: here the husband is played by Harry Gribbon and the wife by Minta Durfee (Arbuckle’s real-life spouse). Both couples decide to patch things up by a trip to the park. They each sit on benches beneath signs that say “No Spooning Allowed.” Minta goes for an ice cream, leaving Harry alone, and Fatty spots her and soon ditches Mabel. Mabel and Harry strike up a flirtation as do Minta and Fatty. Now, a Keystone Cop in a tree spots the couples through a telescope and summons cops to arrest them (one is Arbuckle’s cousin Al St. John). Mabel and Harry manage to evade them, but Minta and Fatty are nicked. After some shenanigans with the cops in a crowded holding cell, each calls their respective maids and leaves a message from jail. The spouses rush to spring them, also taking the opportunity to shame them for their bad behavior, but when they see one another, they behave so awkwardly as to give away their own indiscretions. The entire group squabbles until the cop from the tree comes out and glowers at them, causing them to run for cover, one at a time.

The plot centers around an understanding of the concept of “spooning,” which has I believe fallen out of fashion. Most people today think of it either as a sexual position, or as its equivalent in cuddling – most spooning is done naked, and wouldn’t have been appropriate in a commercially released film in 1915. However, what we see the couples arrested for here is just sitting side by side, snuggling a bit, or in the case of Harry and Mabel, walking alongside holding hands. I think there is a deliberate implication of “soliciting” here that adult audiences would recognize, but which is suppressed by the use of the more innocent-sounding word. That’s also part of the humor, if I’m following it right. At any rate, this is a fairly typical Keystone domestic/situational comedy, in which the spouses are equally guilty of philandering, and get caught and shamed for their actions. It never really descends into the kind of chaos we would expect in a full-on slapstick movie, but the cast, especially the cops, get bits of physical comedy. Mabel is especially funny when she beats up on Fatty in the beginning of the film.