Another comedy short from Max Linder in which he aspires to something, only to fail spectacularly, and humorously, to achieve it. This time, the humor relies on editing, which is an interesting new feature. 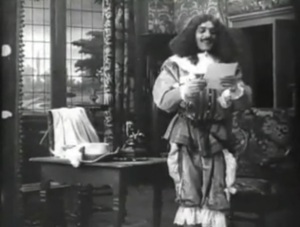 We see Max in a small circle of friends (2 men, 3 women). He is holding forth or reciting for their amusement, and they all laugh and applaud appreciatively, but apparently Max was attempting to be serious. He tells them they should come see him in his new dramatic play, and writes them out an invitation. The scene now cuts to Max, in period dress, standing on a small stage. He gives a bow and begins to perform. The sequence is cross-cut between him and the audience, where his friends are seen prominently sitting in the first two rows. At first, his performance is drawing applause, but in the middle of a scene in which he is professing love over the telephone, a woman comes on stage and yells at him, flustering him so that the apparatus is caught in the curls of his long wig. This draws laughs rather than applause. The story develops such that the two women fight a duel over Max, which is handled in deliberately formalized manner with fencing foils. The one who yelled at Max is victorious, stabbing the other (presumably the recipient of the phone call) with her sword. Max now runs on stage, his wig still quite frazzled, and threatens her with his sword, which he cannot pull from its sheath. She runs off stage anyway, and Max kneels to lament the loss of his love. Unfortunately, his wig keeps falling over his face, drawing more laughter, so he takes it off to give his final soliloquy. As he does, the audience is shown to be looking increasingly concerned, even horrified, by the action on stage. Finally, in a reversal of “Romeo and Juliet,” Max pulls poison from his pocket and drinks it, giving his final words as he dramatically dies. As soon as he has fallen across the body of the dead woman, he leaps up and runs to the front of the stage to receive his applause, but when the cut comes we see the entire audience has fallen asleep. Max does not appear alarmed, and he quickly goes off stage and comes back with a fire hose, which he turns on, spraying the audience and letting them know what he thinks of their performance.

Most of this movie depends on the cross-cutting from stage to audience. Because it’s a silent film, we can’t gauge how good or bad Max’s performance is, so we need the reaction shots to understand how the story is progressing. This also adds a bit of suspense to the denouement, because the last we saw, everyone seemed to be rapt with attention, but at the very end we learn that Max has gone on too long and everyone fell asleep. I don’t recall another of Linder’s movies that relies so heavily on reactions and cutting, so that makes this one a special case. Otherwise, it’s fairly typical of the structure of many of the Linders I’ve reviewed in recent months – Max is sure at first that he will be able to do something, then learns to his chagrin that it isn’t as easy as it looks, and his reactions as the pressure mounts are increasingly desperate. Max’s natural charm makes watching him fail at something a surprisingly delightful experience.