This short from Max Linder presents his typical character with an unexpected gender reversal, far from typical in the early twentieth century. Looked at today, Max’s responses to the situation make us think about what the average woman endured at a time when all professionals were (perceived to be) men. 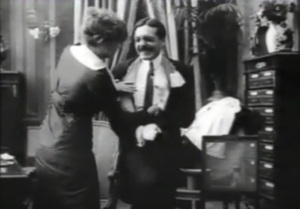 We see Max in a stairwell, with a letter he has written to an attractive neighbor, requesting a rendezvous. She ignores him as she walks by, but then he has a bright idea to get in legitimately – he will ask for an appointment. He preens himself a bit before ringing the bell, as usual showing the audience his anticipation of pleasure-to-come with gestures and expressions. Max walks into a nicely-appointed apartment and is greeted by a servant, who for some reason does not take his hat and coat, but merely directs him to wait. After a moment, the woman emerges from another room and invites him in. This room also looks like the typical Linder interior set, except that there is a tray, evidently with some medical implements in the center of the room. Max takes some time figuring out where he wants to stash his hat and coat, and eventually sits down to explain his ailment to the woman, who asks him to stand up again. She tries touching him in a couple of places, each time Max gestures negatively – no, that’s not where it hurts. Eventually, she tries touching him in the stomach, around where the kidneys are, but this makes him flinch. At first I thought he was in pain, but as she tries a couple more times, it becomes obvious that he’s ticklish there. Eventually, by closing his eyes, he is able to endure her touch. She writes him a prescription and he leaves. 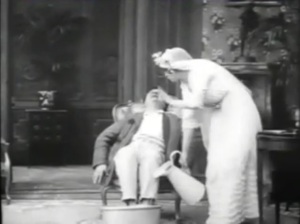 In the next scene, Max comes rushing back into the doctor’s office. He gets down on his knee and produces a ring. She looks thrilled, and accepts it. In the next scenes, the doctor wears a bridal gown. She very chastely accepts a kiss, but will not let him remove her veil. The servant now rushes in with a note telling her of an urgent case and she runs out, still in her bridal gown and veil. We see a scene in which she assists a woman with giving a man a foot-bath. Then she returns to Max, who manages to get her veil off before the next emergency is announced. Each time, Max shows his rage at these interruptions. This time, she is called on a poisoning case, and apparently wants to induce vomiting (we see a basin, but nothing truly vulgar happens on screen). This time, when she returns and the servant walks in, Max chases him out, tossing a pillow after him. He and the lady doctor laugh.

Next, we see the waiting room, which is filled with men. The doctor comes out to call in the next patient, and we see him showing her how bad his cough is. Now Max comes in to the waiting room carrying a baby, and looks around suspiciously. He looks into the office and sees his wife encircling the man’s chest with her arms (not really an embrace – sort of like a Heimlich Manuever, but with her ear against his back). He puts down the baby and flies into a rage, running into the room and ejecting the man, then proceeding to bully and abuse all the other men into leaving. The final shot shows Max and the doctor in their bedroom, the doctor is rocking the baby, and Max contendedly smokes a cigarette. 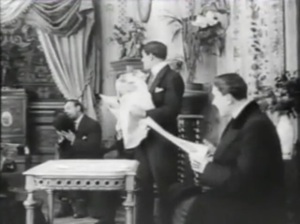 This is a rather odd story – ultimately what I’d call “a long walk for a short laugh.” Max evidently goes to the lady doctor in the first place as a form of courtship, and is punished at the end by the fact that other men are doing the same. His resolution is to deprive her of her career and turn her into a housewife. Ultimately the movie appears to condone sexism, but it certainly also highlights it in a number of ways. When it shows Max’s discomfort with partial disrobing and being touched by the lady doctor, it calls our attention to the fact that women going to the doctor at this time had to accept the touch and gaze of a man in order to get treated. Since Max is able to overcome his ticklishness by closing his eyes, it appears that he might not have so much difficulty with a male doctor, and that also raises questions about how we respond to gender. And, to begin with, Max is not really treating her as a professional, but rather as an object of desire, highlighting the harassment that working women receive and the difficulty they have being accepted in positions of authority, no matter their qualifications. I wouldn’t call this Linder’s funniest film, but it’s an interesting one nonetheless.