Max Linder stars in this short from Pathé. As you might guess from the title, it depicts a man whose first time smoking doesn’t quite turn out as planned. 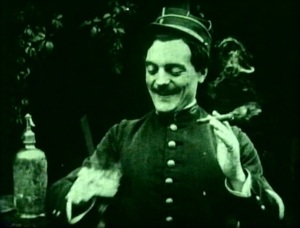 We see Max at a table in a well-appointed dining room, sitting with an older gentleman (his father, presumably). The old man suddenly gets up and leaves, leaving Max alone with his cigar box. Max jumps up and stuffs his pockets full of them, showing his delight at anticipating enjoying this illicit pleasure. A woman comes in (his mother, we assume), but does not suspect anything as Max prepares to go out for the day. He walks to a sidewalk café and sits down, ordering a drink from the waiter and flirting a bit with a woman from the next table. He gets out one of his cigars and lights it. The shot changes to a close-up as we watch Max smoking, drinking, and flirting. Things are fine at first, but gradually he begins to make faces suggesting nausea. Max throws the cigar down. The shot cuts back to long as he staggers off, to the amusement of the waiter and the people at the next table. He makes his way back home, but at first he can’t get in because he tries to use a cigar instead of a key, and then his hands re shaky so it’s hard to fit the key. He accidentally enters the wrong house and is kicked out by a man in his nightclothes wielding a gun. Then he makes it home, but his mother, disturbed that he is pulling down various decorations he tries to hang on to, tries to comfort him with a drink, which only makes him look sicker. 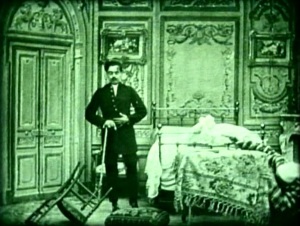 With this film, we return to the now-familiar pattern of Max anticipating a pleasure, only to be disappointed by the reality and ultimately be ruined by it. In this case, he’s also being punished for stealing from his parents, and perhaps for trying to put one over on the girl he flirts with. Given the simple plotline, I was a bit surprised at the number of set-ups used to tell the story, and especially with the use of close-up to show the transformation in Max’s mood. Other Linders from this period that we’ve seen have saved the close-up for the denouement. It was a good choice, however, because we needed to see how he went from happy and relaxed to nauseous and stumbling. The fact that much of the humor relies on a lengthy insert-shot of Max’s hand trying to fit a cigar then a key into a keyhole is more questionable, but different. It was also a little surprising to see Max portraying a man so young (the French title, “Le premier cigare d’un collegian,” suggests he is home from college). Linder was 25 at the time this film was made, and though he always shows youthful exuberance in his film, he doesn’t really come across as an adolescent. Still, twenty-somethings playing teenagers in cinema would remain a standard for most of the twentieth century, so it can’t be called out as a peculiarity of the time.