This is an apparently incomplete fragment of a longer story produced as a feature for Edison late in their production career. It tells a familiarly heart-warming story about a baseball player, using real locations and players to give verisimilitude to the melodrama. 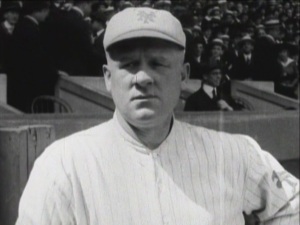 The excerpts begin by introducing John J. McGraw, the real-life manager of the New York Giants, who is talking to a recruiter who has seen an amazing player named Bill Cosgrove (John Drew Bennett). McGraw seems skeptical at reports of the boy’s prowess, but agrees to give him a try. We then jump to the “deciding game of a world’s series” in which the Giants are playing against Philadelphia. McGraw looks on stoically as the seats of the Polo Grounds swell with fans. 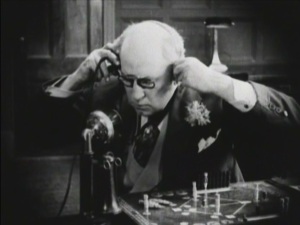 Bill’s father (John Henry), however, listens to the game via a “private wire” on his telephone and uses a game board simulating a baseball field and pins to represent players to follow along. He grows increasingly excited as his boy comes up to bat, hitting a triple and eventually stealing home. At this point the “old man” is dancing about the room, to the concern of his wife and employees, who fear for his bad heart. Mr. Cosgrove decides that if he’s going to die of excitement, he’d rather do it in a grandstand, and has the chauffeur drive him to the Polo Grounds, where he takes a seat next to a an old grouch, evidently a Philly fan, who doesn’t think much of Cosgrove the ball player.

When Bill comes out on the field and sees his dad, he waves, but Mr. Cosgrove, perhaps afraid to make the man next to him angry, doesn’t return the greeting. This puts Bill in a funk, and he starts striking out. We learn that his father didn’t approve of his marriage or his becoming a professional ball player, and this has him depressed. The ninth inning arrives with the Giants down by two runs. Now, Mr. Cosgrove’s true feelings come out, and he starts rooting out loud for his son, joined by Bill’s wife Leonora, and cheered by them, Bill hits the decisive home run. The family is seen uniting on the field after the game.

This movie, or what I was able to see of it, consists largely of images of baseball playing and rather long intertitles. The camera angles are much more creative than what we saw in some of the earlier baseball movies, more in line with what we expect after decades of TV coverage of games. Quite a lot of the shots are taken from high angles, suggesting that cameras were placed in the stands as well as on the field. Given that the in-story game is obviously fictional, we must assume that many of the shots were taken at actual ball games, not least because of the very full stands in the background. Actors are shown in close-up, alternated with shots in long-shot that presumably show us the real players. This works pretty well; at no time is the continuity broken that I noticed. In its incomplete form, however, the story isn’t exactly satisfying, and given the pacing, I suspect the full version would drag somewhat. Although technically proficient, I’d chalk this up as another late-era Edison that shows why the pioneer movie studio didn’t last long into the period of classical silent movies.

I have not been able to find this available for free on the Internet. A short clip can be viewed: here.