This baseball film from Thomas H. Ince emphasizes small-town values and staying true to your roots as ideals, just as many films about “the Great American Pastime” would do in years to come. It features a young Colleen Moore as the love interest, still a few years away from becoming the national symbol of “flapper” fashion.

The movie begins by introducing us to Ben Harding (played by Charles Ray), a small-time pitcher from Brownville. He is already in his baseball uniform as the movie opens, and we get the idea that he’s pretty devoted, in part because he carries a baseball glove around in his pocket. He tries to sneak past his snoozing father on his way to the ball park, but he drops the chain that fastens the gate to the fence and has to go back and tell him where he’s off to. Dad looks stern, but we can see he’s secretly proud of his son’s talents.

The next scene introduces us to the “St. Paul Pink Sox,” a baseball team traveling by train to their next engagement. As we first see them, they are crowded around a small table on the train, hotly engaged in a card game. When their manager comes in, they assure him that they aren’t gambling, just having “playing for fun.” This sets up two important things: first, that the ball players are sophisticated and not entirely honest, second, that their manager is somewhat naïve. When the train pulls into Brownville, it is held up due to a washout, and the players are alarmed to learn they’ll be stuck in this backwater for at least a full day. 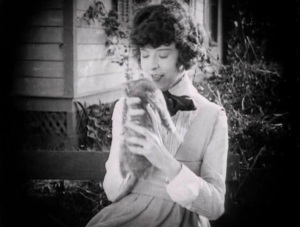 Next, we meet Mazie Palmer (Moore), who is cuddling a kitten in the yard with her brother (Jay Morley). Ben shyly wanders up to the fence, and Mazie brings the kitten out to meet him. She makes a fuss over his uniform and he thanks her for the stockings, which she apparently got from “widow Brown.” He seems at a loss in the conversation and plays with the kitten for a while, so Mazie takes an interest in his glove to keep things going. At this point, Jim Blair (John Gilbert), the banker’s son, drives up in a fancy new auto, and wows Mazie with his money and charm. She goes for a ride with him when Ben more or less skulks away in embarrassment.

The boys from the Pink Sox have started a practice game next to the rail yards, and when they see Ben in his uniform they go in for a bit of ribbing. Ben has no idea who they are but takes it all in stride as they challenge him to pull together a team and play against them. The manager looks interested in this bush-league player, but the Sox just think it’s a big joke. Ben is allowed first pick for his team, but since he doesn’t know these are pros, he just picks his friends from Brownville and the teams are basically the Pink Sox vs. Brownville. But, to the surprise of the city boys, the Brownville pitching is so good that their players have a hard time scoring a run. It’s Ben’s dad who figures out that he just struck out Tom Slattery, one of the toughest major league batters. We don’t actually know who wins, but Ben’s playing, especially his curve ball, has definitely made an impression on the manager, who gives Ben his card and tells him to take care of his arm.

There’s a brief interlude in which we see Ben and Mazie putting a cow into a corral before we get to the major small town event, the “box social.” This is a kind of date-auction, in which men bid for women based on their silhouettes behind a curtain, and the winner takes the girl as well as a boxed lunch (actually shown in baskets here). This sets up a situation in which Ben and Jim get into a bidding war over a silhouette they both think is Mazie, but is a less attractive girl with a similar bow in her hair. Jim figures it out first, and Ben loses all his money bidding on a date he doesn’t want. Jim of course gets Mazie, and then to make matters worse, a telegram arrives for Ben. Like all small town folk, Ben knows a telegram has to mean someone has died, so he runs from it while his father opens it in front of everyone to learn that he has been picked for the Pink Sox! They rush in to let him know, and Mazie looks on adoringly, letting us see her real feelings. She lets Ben walk her home, and says how lonesome she’ll be with him gone. Ben finally works up the courage to give her a sweet kiss. 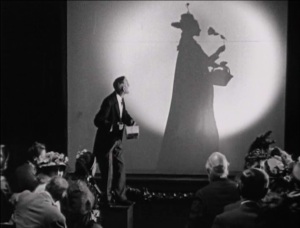 Once in the city, Ben immediately establishes himself as a “rube” by being too afraid to walk past the doorman to his hotel without asking permission. The ball players see him and decide to give him the treatment. They pretend to be checking him over and put a sign on his back reading “100% perfect.” They obviously think it’s great fun to act “sophisticated” in silly ways they know he’ll imitate, including a silly walk and greeting they give each other in his presence. They laugh behind his back as he tries out his new “city ways” on girls he meets in the lobby.

Meanwhile, his fame at home has only grown, and his father is arranging to get as many supporters as possible to make the trip to St. Paul for Ben’s first game. He lends money to some people just to beef up their numbers, and of course Mazie leads them in a rehearsed cheer. They have managed to secure a box at this event, and decked it out with signs honoring “their hero.” But, Ben is now more concerned with a city girl named Pearl who has apparently put money on the game, and he doesn’t go over to greet them, probably because he wants his team mates to see him as “sophisticated.” Apparently flustered over the whole situation, Ben blows his first time on the mound, and allows the batter to hit a home run right out of the gate. The manager takes him out of the game, and when he argues, tells him he’s through.

The next scene shows Ben slipping quietly back into Brownville, having hopped a ride underneath a train. His clothes tell the story of months of poverty and wandering since we last saw him. He spies Mazie talking to Jim at her fence, but he ducks out of sight and goes to his father, who shows understanding, of course, and invites him to stay at home. When his father gives him back his old baseball glove, though, it seems to cause him painful memories. He also slips him a little cash.

We learn that the manager of the Brownville team has taken to playing cards with a mysterious stranger and a seemingly crooked new pitcher for the team. There’s a game coming up with Centerville that will allow him to pay off his debts. The whole town turns out for the game, but no one will speak to Ben. But, the manager is frantic when he learns that his star pitcher is down with a cold. Centerville quickly strikes out the home team in the first inning, and Mazie’s brother goes to find Ben working in his father’s fields. He looks reluctant at first, but he’s still carrying that old glove around in his pocket, and he agrees to give it a shot. Mazie is the first to leap to her feet when Ben’s name is announced as pitcher. He pitches a perfect game, and wins the day.

At this point, we learn that the mysterious stranger is actually a recruiter for another major league team, and he offers Ben another shot at the big time. This time, though, he’s learned his lesson – he looks at Mazie and knows he wants nothing more than to stay with her. She shows him that she’s still carrying one of his clippings from his first game. We see a repetition of the earlier scene where they bring in the cow (with Mazie in what looks almost ike a bridal gown) and know that Ben has found out what really matters in life. 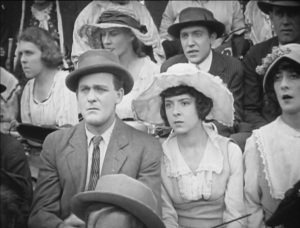 The two principal actors are key to the success of this movie. Charles Ray as Ben is the right combination of lanky, baby-faced, serious, and awkward for the role of the rube-ballplayer, and Colleen Moore’s screen presence is already undeniable. In fact, a surprising amount of the emotional tension of this film hinges on her reactions – when Ben first gets his telegram, when he only seems interested in the city girl, when his name is announced as pitching for Brownville, and throughout all of the games he plays, the director cuts to her to let the audience know how they should feel. She has a rather more old-fashioned haircut than the flapper bob for which she’s famous, and her (sometimes overstated) exuberance isn’t on full display here, but she shows an ability to capture attention with a glance, a smile, or a pout right out of the gate.

I hadn’t thought before about how well baseball translates to silent film, because the umpires’ calls are all associated with hand signals. You don’t have to be a baseball expert to recognize when the ump calls “Safe!” “Yer out!” or “Strike tuh!” (as it’s spelled in the intertitles) because those hand signals are the same 100 years later. Baseball is a surprisingly visual game, that needs little interpretation to understand. It’s interesting as well to what degree it is associated with the virtues of the American small town, and how the movie is able to balance laughing at the simple small town behaviors while still extolling them as ultimately superior. Real-life baseball players, who sometimes become involved in scandals and even crime, would find it hard to live up to that standard, but the myth survives in the American mindset. 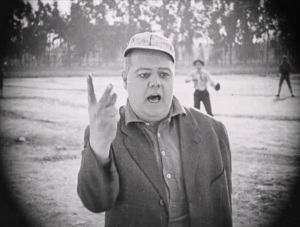