This live-action documentary short from the Ford Motor Company is quite different from the animated political cartoons we’ve seen from them in the past, but it still has a basically political message. In this case, it’s a positive one about re-integrating wounded veterans in the workforce and American society. 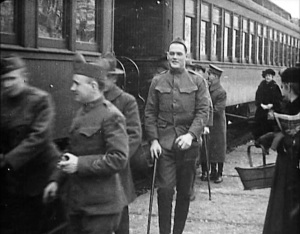 The movie consists of a series of documentary images tied together with intertitles. It begins with footage of an ambulance crew on the battlefield, loading a stretcher into their (no doubt Ford-built) vehicle. This is followed by several cards worth of “purple prose” about the heroics of the men and medics of wartime, and then we see soldiers with canes being disembarked from a train and climbing into another ambulance to be shuttled to a hospital. At the hospital, the footage emphasizes occupational therapy, a relatively new idea in which recuperating men are encouraged to perform tasks to restore their muscle strength and coordination, as well as in some cases re-training skills they might be able to put to use in paid work after discharge. We see them receiving physical therapy from nurses and doing gymnastics. We also see the production of artificial limbs. A soldier with a missing leg comes in to receive his and gives a little jump for joy on the way out the door. END_OF_DOCUMENT_TOKEN_TO_BE_REPLACED