This may or may not actually qualify as a Century Film, but it seemed pointless to wait until one could be certain before reviewing it. It is a light-hearted piece of “human interest” from a newsreel starring a famous figure.

The opening intertitle establishes that the audience can expect a “surprise,” but the film imagery begins with a prosaic view of an experienced potter at his wheel. As the clay spins, it takes on new forms under his skilled hands. The apparent ease with which he transforms it seems to recall thousands of years of the development of his trade. After only a few seconds of this, the “surprise” is announced: “Who should drop in by Mr. & Mrs. BABE RUTH.” They stand behind the potter and watch him at work on a smaller pot, both appearing completely absorbed in watching his hands at their work. Babe removes a glove and touches the potter’s shoulder and a new intertitle says that he “turns from swatter to potter.” The final image shows Babe working on a very simple pot with both his hands, while his foot pumps away to keep the wheel turning. He looks up at the camera and the scene ends. END_OF_DOCUMENT_TOKEN_TO_BE_REPLACED

This trick film from Georges Méliès is quite simple, but may represent one of the most important innovations Méliès contributed to cinema. It also is, as usual for him, a fun and whimsical example of a magic show. 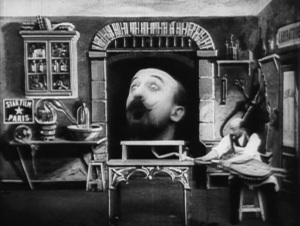 The proscenium-style frame shows us the workroom of a doctor, perhaps a chemist or alchemist. END_OF_DOCUMENT_TOKEN_TO_BE_REPLACED