This short comedy from Comique stars Roscoe “Fatty” Arbuckle and Buster Keaton at the height of their collaboration, giving them a new occupation to demolish – hotel management. The use of large indoor sets and outdoor locations gives them some good opportunities for creative chaos.

Arbuckle and Keaton are uniformed bell boys at the Elk’s Head Hotel, which is managed by Al St. John. We first see Arbuckle emerging from an elevator and looking around carefully, before he protrudes a cigarette from inside of his mouth and smokes it. Keaton is lazing on an easy chair when Al rings the bell and both men hasten to the front. They zip up the stairs to the two visible doors and come out carrying bags. They take them out, leading the two guests to a horse-drawn streetcar, but when Arbuckle tries to throw one of his suitcases on top of the vehicle, it misses and hits Buster, causing the first of many pratfalls. They load up the carriage, the guests get on board, and Al gets into the driver’s seat, driving the contraption down the street and past the “Last National Bank” (remember that one).

After this brief intro, we see Keaton and Arbuckle hard at work on “spring cleaning.” Keaton is washing the (non-existent) window on the pay phone booth, and Arbuckle is very inefficiently mopping the floor from a seated position. A man with a large beard and a bizarre face walks in, frightening both of the boys into cowering behind the front desk, until he minces over to them with limp wrists, and Fatty starts to make fun of him, which breaks into a game of patty-cake that knocks Keaton off the desk in another pratfall. It develops that the bearded man is here for a shave an a haircut, and Arbuckle directs him to the barber shop, where he proceeds to trim his hair in a series of gags, making him appear as General Grant, Abraham Lincoln, and the Kaiser, before strapping him down and putting a hot towel on his face and leaving. 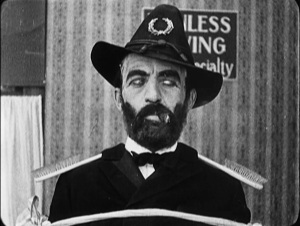 The boys go out to meet Al, who is returning with a cart-load of tourists from the station, but they drop everyone else’s bags to pay special attention to Miss Cutie Cuticle (Alice Lake), a young manicurist traveling alone. While they get her registered, Al oils his horse from an oil can, then hitches him up to a rope labeled “elevator.” This is explained in the next scene, when Buster and Fatty escort Miss Cuticle to the hotel’s elevator and Arbuckle pulls the rope. This sets off a bell outside, and Al leads the horse twenty yards or so down the road. It pulls the rope, and that’s what makes the elevator go up! Keaton and Arbuckle continue to compete for Miss Cuticle’s attention (and her rather large tip) on the second floor, with each one getting the upper hand in turn. 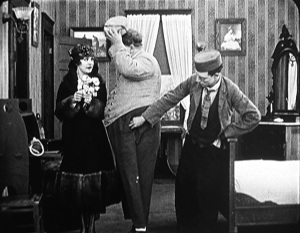 Meanwhile, Al has been left alone downstairs to deal with the large group of irate customers. He goes to investigate, but Arbuckle and Keaton are too fast for him, hiding behind the door while he’s distracted by Miss Cuticle, then returning to their positions. Arbuckle finally takes off the towel from his customer, revealing a clean-faced young man (Charles Dudley), who continues to act effeminately and asks for a manicure. Miss Cuticle enjoys speaking to him, but lets Buster know that the state of his nails are unattractive to her, and both he and Arbuckle choose odd methods of cleaning them. The group of other customers has been taken by Al into the restaurant, which has a sign reading “French and German Cooking” (the war is an influence on the humor here). Buster is trying to mop the floor, but his dad Joe Keaton walks out and has his hat knocked off twice, blaming Buster, who inadvertently fills it with mop water before returning it. When it’s knocked off a third time, he rounds on Al, who was innocently walking by with a plate of French and German food for the customers. Next, Buster tries to take the customers up on the elevator, but the horse stalls out and refuses to budge. He gets his head caught in the elevator when Al seizes on the idea of building a fire to move the horse, and when the fire burns through the rope, Miss Cuticle is propelled by a loose board onto the mounted elk’s head that gives the hotel its name.

Buster and Fatty rescue her, but as a result Buster is now trapped on the elk’s head. They leave to go on a pleasant country drive together. Buster manages to escape the head by ripping his pants, but now he’s trapped on the board that projected Miss Cuticle in the first place. He bounces helplessly up and down, apparently unable to stop. Al hands him a phone and goes over to the phone booth so he can speak with him. Buster pleads for help and Al gets a saw, cutting the board between Buster’s bounces. It breaks and Buster takes another pratfall. Meanwhile, Fatty and Alice kiss and we get what looks like the end of a reel.

The next storyline begins with a dance at the Elk’s Head Hotel. Arbuckle, Keaton, and St. John  are all dressed up in their dubious finery, and Fatty comes up with a plan to make Alice see him as a hero. The others will pretend to be robbing the Last National Bank, and he’ll come to the rescue. Despite the ridiculousness of the plan, and their competing interests in Miss Cuticle, the boys quickly agree, donning burglar masks and gathering shovels, and picks, and a canary in a cage for the job. However, when Buster and Al arrive at the bank they discover that it is already being robbed. The robbers brawl with Fatty, Buster and the clerk, and in the ensuing chaos the thieves get away, hijacking the hotel’s horse and trolley and riding out of town. The others give chase, but cannot catch them. The thieves become unhooked from the horse whilst in the middle of an uphill climb and come speeding back down the hill before crashing into the hotel lobby. The thieves are arrested; Fatty is given a reward for apprehending them, and receives another kiss from Cutie.

There are tons of gags in this film that I haven’t even hinted at, even with that long summary above. It would probably take a book to list them all, never mind analyze them to any degree. This is a favorite among the early Keaton/Arbuckle movies, and it is clear that they were comfortable working with each other as a team now. It’s still clear that Arbuckle is the one in charge, however. The movie isn’t titled “The Bell Boys,” and Keaton isn’t on equal footing. His character’s rivalry with Arbuckle for Alice Lake only lasts until she sees his fingernails, and from then on he’s just an assistant for Fatty’s schemes to win her affections. Still, he’s getting a lot of screen time now, and is arguably more important to the movie than Al St. John, who was Arbuckle’s cousin in real life and had worked with him for many years. It’s almost a partnership.

As I have before, I wonder how audiences of 1918 read the swishy caricature of Charles Dudley’s performance as “Rasputin the Mystic” (as some sources refer to his character). Sophisticated folks like Roscoe Arbuckle surely recognized it as a parody of a gay man, but what did your average moviegoer think about it? It’s hard to know, but it does remind us that these stereotypes have been with us for a long time.