This short film from IMP (the predecessor to Universal Pictures) is a simple morality tale about a philandering husband’s comeuppance. It is probably known today mostly because of starring a young Mary Pickford along with her then-husband Owen Moore. 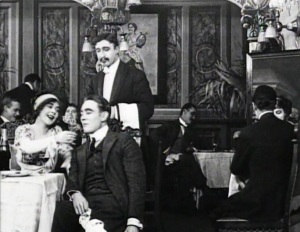 The film begins by depicting a drunk couple out together in a restaurant. The man (Moore) staggers around and hands the waiter all of the money in his wallet. In the midst of their carousing, we briefly cut away to images of a woman (Pickford) sitting dejectedly at home alone, with dinner waiting on the table. She doses off for a moment, and checking the time, determines that it is getting quite late. An intertitle informs us that the husband returns six hours later, but the wife doesn’t seem angry or concerned, just happy to see him. That quickly changes as he yells at her, throwing the food she made on the floor and turning over a chair before passing out on a divan. She seems very upset by his behavior.

The intertitles now inform us that the next scene is “HIS DREAM,” in which the tables are turned. He sits up on the divan as the wife appears in an elaborate hat, holding a decanter of liquor and smoking. She drop kicks a plate and pulls down a curtain, as well as pulling his hair, blowing smoke in his face, and hitting him with a pillow. Then she goes out, to be met by a fellow in a silk hat with a motorcar, and they drive off together. The husband follows them, evidently to the same restaurant where he had his date, and sees them drinking and laughing together. His wife is “the life of the party” and is drawing attention from patrons at all the other tables. Horrified, he runs out.

Back at home he pantomimes his distress and writes a goodbye note, telling her she “is not the woman I supposed” her to be. Then he pulls out a pistol and shoots himself in the stomach (very painful by the way, and not likely to kill you). He immediately wakes up after the shot goes off, and finds himself in a room disturbed by his destructive activity, but not by hers (the curtain is un-torn, and the plate unbroken). She comes out to him and he pantomimes his dream, to her increasing horror. Finally, she comes to comfort him and he realizes that he has experienced all of the suffering he put her through. He pulls out his empty wallet in embarrassment, but she embraces him. Finally, they sit down to eat breakfast, with her sitting on his lap.

I fear our knowledge of the bad marriage between Pickford and Moore probably encourages us to read a bit too much into this movie. Moore was jealous of his wife’s success, and simply wasn’t on her level as an actor. He was basically signed to IMP because Mary made it a condition of her taking on a contract, which he found humiliating, and the story goes that he became an alcoholic to deal with it. Ultimately Pickford found another man (Douglas Fairbanks) and left him, although that relationship had its share of ups and downs as well. This movie was made well before any of that, though, and it probably represents the director’s (Thomas Ince) idea of a “message picture” or social commentary. He was pointing out the irony of what women had to put up with from their husbands who drank, and that men rarely if ever had to face these issues. No doubt it never occurred to him that Owen and Mary were heading down that road themselves.

Most of the acting challenge in this movie falls on Moore, and he doesn’t really acquit himself well. Even by the standards of 1911, he overacts and gestures too broadly. Mary tends to seem understated by comparison, even when she’s doing the drunken hussy act. It’s a lot of fun to see her drop kick a plate, though. The production values are low, with only two sets used to any extent, and a couple of quick externals to show leaving and arriving from those locations. This isn’t unusual for the time, but it also isn’t especially impressive. The cutaways to Pickford at home are a bit more innovative, as they tie in the first action we see to a broader narrative, though it isn’t obvious at first how the two places are linked.