This short propaganda film from the Ford Motor Company represents an interesting moment in American corporate history. It is also an example of the crossover between film and the newspaper “political cartoon,” in which the animation becomes part of the commentary. 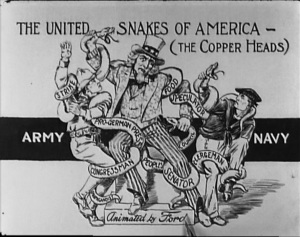 The film consists of a slow reveal, in which the cartoon is drawn for us piece by piece. At first we see blocks labeled “Army” and “Navy,” to either side of the screen, and the heads of figures representing those groups are added afterwards. Then, in the center of the screen, Uncle Sam is painstakingly drawn, apparently in the midst of some conflict, but parts of him remain blank. Finally, reasons for these blanks become clear, as serpents are drawn coiled around Uncle Sam and the two military figures, filling in the areas we could not see before. These serpents are labeled with various internal enemies, including “food speculator,” “pro-German press,” “strike,” and “people’s council,” as well as (more surprisingly) “senator,” “congressman,” and “clergeman” (sic). The whole scene is labeled “The United Snakes of America (The Copper Heads).” 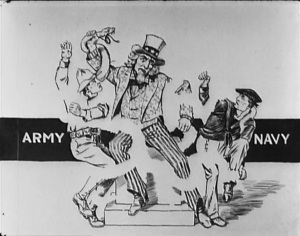 Parsing a dated political cartoon can be harder than we think. When this film came out, the United States was newly committed to participation in the First World War. What is mostly going on here is that Ford is identifying various groups seen to be undermining the war effort and implying that their actions are betrayals of American soldiers and the country as a whole. That’s easy enough to understand, but some of the specifics have since become obscure. The term “Copperheads” refers to a faction of Democratic congressmen who wanted to negotiate for peace with the Confederacy during the Civil War. Ford is suggesting that the current crop of un-patriotic opponents of the war are of the same ilk (the Civil War took place in the 1860s, so this is similar to someone calling their enemies “hippies” today). Some of the groups identified are familiar – people almost always blame congress when the government doesn’t act quickly enough, and since this comes from a major corporation it’s no surprise to see labor (represented as “Strike”) represented as an enemy of American strength. The “People’s Council of America for Democracy and the Terms of Peace” was a pacifist organization active during the time, and “food speculators” were commonly accused of taking advantage of food shortages in Europe to get rich at the expense of people’s suffering (“war profiteers” would soon follow, and some would accuse Ford himself of being one). The one I’m least certain about is “clergeman,” which I assume to be a misspelling of “clergymen” and would be a criticism of Christian ministers who spoke against warfare, I guess, unless it’s the name of an individual lost to time. Its position, next to “Senator” made me think that perhaps Ford was calling out a “Senator Clergeman” at first, but now I think not.

Henry Ford was of course a famous industrialist and also very politically active. He would become associated with various far-right causes, through his paper “The Dearborn Independent” and is perhaps most noted today for being directly involved in distributing and promoting the anti-Semitic “Protocols of the Elders of Zion” in English. This cartoon is relatively mild compared with some of what the “Dearborn Independent” would later publish. Ironically, the Ford Foundation, founded by Henry and his son Edsel in 1936, today supports a variety of progressive cultural institutions through grants and has been accused by the John Birch Society of being part of the left-wing conspiracy that dominates the US.

You can watch it for free: here (thanks to Baddest Moon, below).