This short industrial safety film was produced for US Steel by Thanhauser, and contains some unusual narrative elements, some of which are hinted at in the title. Obviously intended to speak to new immigrants and unskilled laborers, part of the purpose was to reassure them that their employer cared about them and their aspirations. 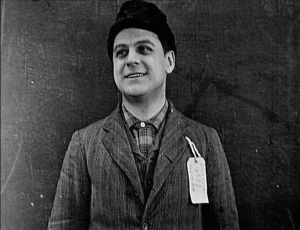 The movie begins in the “old country,” where a young peasant (Harry Benham) receives a letter from a brother in America, who has saved enough money to get him passage to come to the USA. We see him at work in the field, and then he is called into the house by his aging parents who show him a letter written in a non-English (apparently Slavic) language. The next we know, he is arriving on Ellis Island, an awkward insert shot showing him with a tag pinned to his jacket identifying him for the customs officials. He walks out into the streets of New York and to Pennsylvania Station, still with the tag attached, and rides to Gary, Indiana, the “model workers’ city” established by US Steel. His brother meets him at the train and removes the tag from his jacket. They go into the city and the brother steers him away from a saloon and to the impressive edifice of the YMCA for off-hours entertainment.

Soon, he is at work, and we see safety signs in four languages, at least two of which are Eastern European. At this point the fictional narrative essentially grinds to a halt as the film strives to demonstrate various safety precautions and devices used on the job. We see a “universal symbol of danger” (in black and white it is a dark circle on white paper; I assume it’s meant to be red), a device for safely derailing oncoming trains when someone is working on the line, safety goggles, a guard for a table saw, and a large hand-protecting device that resembles a catcher’s mitt. We now see a variety of safety badges that workers can earn on the job. Then we see some depictions of the steelmaking process: large cauldrons with molten metal, a blast furnace, and crucibles pouring the lava-like substance into molds. It’s very visually dramatic, but loses both the thread of the story and any awareness of safety. 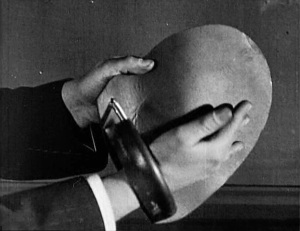 How do you work with this thing on?

Finally, we return to our immigrant hero, who is taking company-sponsored English classes. He is excelling, and his diligence has caught the attention of the pretty young teacher (Ethyle Cooke). She lets him walk her home and in the next scene we discover that they are happily married with a child, living in a pleasant suburban home on his fine wages (we don’t know whether she still works, one tends to assume not). Their son goes to a “model school” and plays in a playground built by the company. The movie ends with their smiling faces showing how a foreigner has found happiness in his new land.

Is this thing safe?

It’s pretty hard to make a safety film with an interesting story, but Thanhauser gave it a shot, and wound up making two movies that don’t hang together very well. The narrative part of the story demonstrates how a sober, hard-working young man from another country can assimilate in the United States, when encouraged by a benevolent employer like US Steel. The second movie is basically a series of safety demonstrations, in which the protagonist of the first film plays at best a supporting role, and is forgotten completely for some of the time. It’s interesting how much of the movie was shot on location, and that many of the unpaid “extras” stare openly at the camera or the performers. Part of the intention probably was to show off Gary and its pleasant working and living conditions. 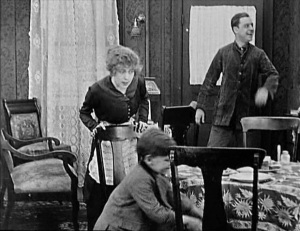 The oddest part of the narrative for me was the ending, which seems to imply that there are enough single female schoolteachers in America to supply wives for all of the workers, and that an educated native-born woman would be readily available to an unskilled immigrant laborer. I had found myself wondering only moments before this sequence started what the prospects for meeting women in the apparently all-male society of Gary were like at the time, and the rather outlandish resolution only emphasized this further. I tend to think that the writers at Thanhauser found themselves written into a corner and did their best to fight their way out of it, but it only works with considerable suspension of disbelief. Still, it’s nice to see a movie from this period that seems to celebrate the “melting pot” concept rather than expressing xenophobia about immigration.