This short trick film from Georges Méliès plays on themes of transformation and frustration we’ve seen from him before. Once again, he shows his proficiency with effects and presents a whimsical acting style. 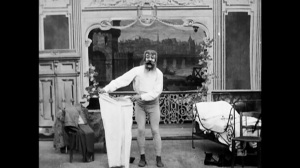 A man (Méliès, with a wig and false mustache) rises from bed and prepares to put on his clothes. He seems to be in a bourgeois apartment or possibly a nice hotel room, and there is a large picture window behind him, with a painted backdrop depicting Paris from an upper-story window. The man begins to pull on his vest, but suddenly there is an edit and he is pulling his trousers over his arm. He hits himself on the head, perhaps thinking he needs some coffee, and starts to put on the pants, but as soon as he gets one leg up to his knee, they suddenly become a shirt. He tries this several times, with the pants turning into a coat, vest, or a shirt each time he starts to put them on. Finally, he throws this garment to the ground and starts to pull on a boot, only to find that he has his hat on his foot. He puts the hat on his head and it becomes a boot again. With that, he gives up and climbs back into bed.

I’ve said that cinema is the realm of dream, and this movie reminds me of anxiety dreams I’ve had, especially when I’m stressed out about catching something like a plane (or train) the next morning. The film is really just another variation on the theme of “The Bewitched Inn,” in which a traveler is prevented by supernatural occurrences from being able to relax, but there’s a ring of truth to it, that somehow the simplest of tasks becomes impossible when you have a deadline to meet. Méliès is particularly amusing in this one-man show, seeming bemused by his absent-mindedness at first, then determined to overcome the difficulties, and finally resigned to sleep in.