Released by Edison three years before “Children of Eve,” this movie also exploits public interest in industrial accidents generated by the Triangle Shirtwaist Fire. Unlike that movie, it also attempts to shift the blame for such accidents away from the owners and managers, and to the workers themselves.

The movie begins by showing an on-site inspector who discovers a pile of materials blocking an emergency exit door. He points this out to the owner (Bigelow Cooper), and begins to write up a citation, but the owner apparently talks him out of it. No money changes hands, and there is plenty of open space visible on a nearby wall, so maybe he has simply promised to move the offending objects. The next scene introduces the “lovers,” Hilda (Mabel Trunnelle) and Tom (Barry O’Moore), who are workers in the plant. When they kiss, the owner and inspector discreetly turn their backs for a moment. A shot follows showing “the day’s work over,” which appears to have been inspired by the famous Lumière short “Workers Leaving the Factory,” and then we see Hilda and Tom celebrating their engagement with Hilda’s family. The family also discreetly leaves them alone after Hilda has a chance to show off her ring. 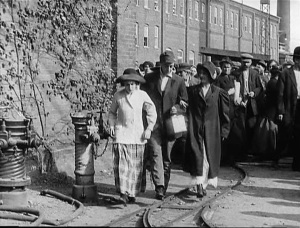 Back at work, Hilda has problems with her loom and so Tom, a machinist, is called in to help and we see the first sign of a possible problem in their romance when Tom habitually lights up a cigarette on the shop floor. Hilda responds with shock – cotton is extremely flammable and audiences at the time would probably have regarded this as equivalent to smoking near a gas pump today. The next scene shows Tom lighting up as he enters the factory (presumably later that day, or on another day), and the owner chastises him, pointing out the sign reading “Positively No Smoking” in case the danger needs underscoring. As soon as the boss’s back is turned, Tom sticks another cigarette in his mouth (he doesn’t light it, though).

Hilda’s happiness is again displayed in a scene showing her wedding dress, which quite possibly she would have sewn herself, voluntarily adding work hours without pay to her day for her own adornment.  Her parents admire it and Tom comes in. She tries to hide the dress, probably in reference to the superstition that it is bad luck for the groom to see the bride before the wedding, but she gives in and lets Tom admire it as well. This is followed by a scene of Tom and Hilda in front of a house with a white picket fence which is to be where they will live when they are married (seems unlikely, given their class status, but it is a small house). Tom is again smoking in this scene. 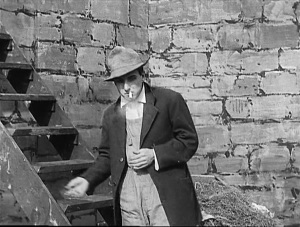 Once again at the factory, Tom lights up a cigarette as he goes down into the basement on some errand. We can see that loose straw is piled around the floor, and Tom throws his match carelessly into it. Within seconds, the wooden stairs have caught fire and Tom can barely run safely back out of the basement to warn the other workers about the fire. Now we see Hilda and the workers trying to escape through the blocked exit, but the material still hasn’t been moved, so they run to another door, which is locked. Tom runs up with an axe and chops through the wooden wall, apparently easier than breaking the lock, and assures that the women get through the exit he has made first. Then he notices that Hilda hasn’t made it – she collapses at the first exit from smoke inhalation. Tom runs heroically back into the building and rescues Hilda. At first, everyone is happy but he confesses that it was his match that started the fire and the crowd turns ugly. Tom runs off as the building burns to the ground. 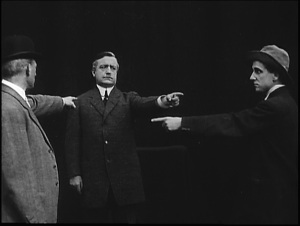 The workers all suffer from lack of work because of the accident, but Hilda has it even worse. She now walks on crutches and cannot work at a factory, so is reduced to doing piecework from home. We see that her family has moved into shabbier quarters, presumably as she was the sole breadwinner. Tom comes to visit and finds her boxing up her wedding dress, possibly intending to sell it to make ends meet, and he collapses in a fit of crying. Tom writes Hilda a note canceling the wedding, and blaming himself for their misfortune. This causes Hilda to see a vision of three men – Tom, the owner, and the inspector – in a round robin of accusation, each pointing a finger at the next. She resolves to go see the owner, and points out to him that he is also responsible, because the exits were blocked. The owner relents and offers Tom a job at his new factory. “I am sure we have both learned our lesson.” Hilda takes the owner’s letter to Tom and they embrace happily, although she is still walking on crutches from the fire. 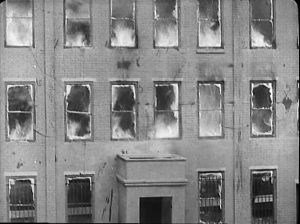 The Triangle Shirtwaist Fire of 1911 caused the deaths of 146 workers and was the largest workplace disaster in New York until 9-11. It occurred largely due to unsafe working conditions, a lack of fire exits, and flagrant violations of existing codes. The owners, who had insured the factory for a great deal of money, actually profited from the fire and paid no reparations to the families of the dead workers. There was widespread outrage, and new legislation was quickly introduced to prevent future accidents. Manufacturers were quick to respond with calls for “worker education” and enforcement of existing laws, and this movie, paid for by the National Association of Manufacturers, was a part of that effort. The fictionalized disaster in the movie is partly the fault of the owner for blocking exits, partly the fault of the inspector for not enforcing safety regulations, and partly (largely) the fault of a worker for smoking on the premises. By giving the owner the opportunity to “forgive” the worker for his misconduct, the movie attempts to shift the blame from greed and capitalism to simple-minded carelessness on the part of a worker. This is victim-blaming at its most sublime.

Edison Studios later produced “Children of Eve,” which I suppose demonstrates that they were neutral on the issue of workplace safety. However, the studio did aspire to be more of a hired gun than a producer of original content – arrangements like the one with the National Association of Manufacturers were actually part of their business model, and so their movies generally reflected the viewpoint of whoever had the money to back a film production. Thomas Edison was hardly a model of business ethics himself, though he’s mostly remembered for monopolism and patent disputes, not endangering workers for profit. The film studio, once the most important in America, had declined into a far less significant position by 1912, and this movie reflects the new reality. The acting is over-wrought and based in pantomime, particularly Tom’s hysterics and remorse over the fire. The sets are relatively cheap, although a real factory floor is used, and the wall Tom chops through is obviously set to break when he hits it hard enough. The wooden model of the burning factory is unconvincing, and the effects of the fire generally unsatisfying. Rather too much smoke was used during the climactic rescue, so you can’t quite see how Tom gets Hilda out of the building. The editing structure is also clunky and old-fashioned, with forward-facing intertitles announcing the action before each scene, and a static camera framing each shot in a proscenium. Thus, this film represents an example of clumsy propaganda, dated even at the time, like many “educational” films before and since.