The first movie to feature an appearance by Buster Keaton came out almost 101 years ago. It was also the first movie Roscoe “Fatty” Arbuckle made for his new Comique Film Corporation, with full creative control over his own productions, after many years working for Mack Sennett at Keystone. 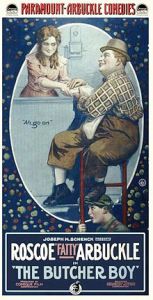 The movie is a two-reel slapstick comedy, and like a lot of  those by this time, it essentially consists of two separate but equally important “parts.” The first part concerns Arbuckle (whose character is named “Fatty.” so that’s what I’m going to call him for the rest of this review) at his job as a butcher’s assistant in a general store. The structure of this section reminds me a lot of Charlie Chaplin’s “The Pawnshop.” Various characters come into the shop and ask for things, and comic misadventures ensue, often due to the obliviousness, or deliberate laziness, of Fatty. Arbuckle demonstrates his agility by tossing knives into the air, which consistently land point-downward, lodged in the countertop. Once or twice he does this with another actor standing on the other side of the counter, which struck me as a bit dangerous, but he’s so casual about it that you’d think anyone could do it. Keaton’s part comes in this section and he is undeniably the most memorable of the various “customers.” He wants to buy a pail of molasses, and some very sticky comedy ensues. Among others, Lea over at Silentology has carefully analyzed this scene, and I can’t hope to add to what she says about it, so I’ll just say that for a first film appearance, Keaton has remarkable poise and confidence before the camera. 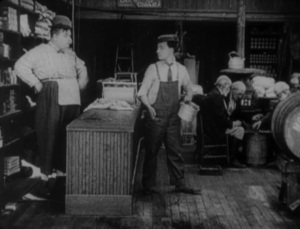 Shortly after Keaton’s bit, the plot starts to move forward. Fatty and Al St. John are both in competition for the one young woman that works at the store, played by Josephine Stevens. She’s the daughter of the owner, and she’s sweeter on Fatty than on “Slim,” but Slim can’t let it go. The two of them play pranks on each other that escalate into a full-scale war, with exploding bags of flour and other random store implements used to cause mayhem. The owner decides to send his daughter to a boarding school, to prevent any further such nonsense (presumably after firing Fatty and Slim both). 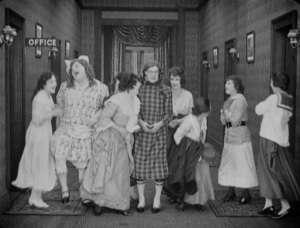 Thus begins the second part of the film, in which Fatty and Al both dress up as girls to sneak into the boarding school and see Josephine. Buster appears again as one of Al’s accomplices, but he has relatively little to do here. Fatty gets in first, and is able to charm the rest of the girls into at least tolerating him, but once Al is on the inside things rapidly escalate to a running pillow fight. Al’s cohorts, for some reason, also sneak into the school to help abduct Josephine, and before long they are caught and held at gunpoint by the schoolmarm. Once again, the scene devolves in chaos and Josephine and Fatty are able to escape. Still in girl’s clothes, he proposes to her in front of a minister’s house, and they go in, presumably to be married. 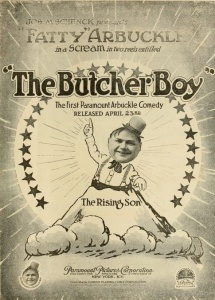 I’d rate this as a good, but not great, Arbuckle movie, and pretty much “of historical interest” for Keaton fans. This movie has the feel of someone trying things out, but perhaps being afraid of going too far at first. I was surprised how much was shot in long-shot, as if Arbuckle was afraid to move his camera too close to all the flying bags of flour and thrown knives. However, choreographing some of that chaos in long shot is still a feat to be proud of. Arbuckle did plenty of drag, before and after this, as well as many roles where he had some kind of customer service job but mostly abused his customers. In fact, he had combined the two before (in “Waiters Ball”). My favorite Arbuckle movies play more on his “big kid” likeability, his boyish charm, and his being the good guy who is wronged by his opponent, but in this one he’s no better than Al St. John, the girl just happens to like him better. At least he’s not forcing himself on her.

It’s interesting that Buster does maintain his “stone face” in this film, given that in “Oh Doctor” he would be expressive to a fault – maybe that was an Arbuckle suggestions that didn’t work out. In his autobiography, Keaton would claim he’d been told his was the first debut in film that didn’t require any re-takes, but that’s dubious in the extreme, considering that nobody was doing re-takes a little more than a decade earlier, and that some people’s debut scenes were literally walk-bys. He does demonstrate comic timing and physical prowess in the stunts Arbuckle demands of him, and if it was done in a single take, it was a good day’s work for sure.

You can watch it for free: here (no music), or here (with music, French intertitles).