Women in silent movies were exotic, strong, beautiful, and courageous. Many, if not most, of the recognizable iconic images of the period are of women: Clara Bow, Louise Brooks, Theda Bara. The men have no equivalents, except perhaps among the silent clowns (Chaplin, Lloyd, Keaton). In Europe, an entire genre (the “Diva film”) was dedicated primarily to looking at women posing in varying costumes, and although this genre didn’t get the same level of recognition in the US, it influenced film making everywhere. To be a star was to be looked at, and women stars used their visibility to become forces of power and even authority.

Yvette Andréyor played the significant role in the “Judex” serial of being the unrequited love interest of the hero – and the daughter of his worst enemy. In “Jacqueline’s Heart,” she unknowingly confides her distress to the woman who was the prime motivator for Judex’s vengeful plans: his mother. She handles this scene, and the emotional drama of the series masterfully. Mary Pickford had her own ideas for the character of Gwendolyn in “Poor Little Rich Girl,” ideas that sometimes conflicted with those of the director, Maurice Tourneur. Mary was enough of a heavyweight in Hollywood that she got her way, and the result is a highly sympathetic and moving performance. Edna Purviance was Chaplin’s leading lady throughout this period of his short films, and once again turned in a thoughtful, funny, and charming performance for “The Immigrant.” She’s a fellow newcomer to the United States, who Charlie meets and pursues, and her reactions are really the emotional center of the romance for the audience. Gloria Swanson was still a rising star when she made “Teddy at the Throttle,” and she’ll be back many times in future years. Here, she gave a comedic twist on the “girl tied to the train tracks” cliché that demonstrated timing and physical ability as well as the acting skill she’s remembered for today. Vera Karalli appears as a mute ballerina in “The Dying Swan,” whose tragic life is a fascination for a mad artist. She conveys her sadness, and its transformation to joy and then to horror, through body language and dance.

The nominees for best actress in a leading role are:

And the winner is…Mary Pickford for “Poor Little Rich Girl!” 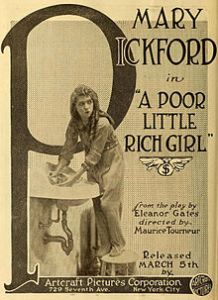 Having declared 1917 “the year of Mary Pickford” in an earlier post may have been a dead giveaway to regular readers how this was going to go. It was not a no-brainer, though, because all of the women nominated had definite strengths. Pickford in “Poor Little Rich Girl” really makes the whole story work. It’s impossible to imagine another actress pulling it off so well. Even in the context of a fairly schmaltzy story that isn’t really my cup of tea, I was decidedly moved by the end, and genuinely wondering/worrying if the script was going to let her die at the end. That’s the power of her acting.