Leading men in movies can be smooth, handsome, funny, debonair, sophisticated, mysterious, brooding, and sympathetic. Sometimes all at once. The movie business had by 1917 set up certain actors as powerful stars, and bidding wars were leading to what seemed insanely high rates of pay for certain actors. Others worked more humbly, but still effectively, giving directors and audiences what they wanted, solid performances that turned good scripts into great movies.

The best performances I saw in 1917 were a mixed bag. Charlie Chaplin gave a very funny performance infused with pathos in “The Immigrant.” He showed confidence, fear, love, determination, and hardship all in the course of a 25 minute run time. Douglas Fairbanks gave a less nuanced but still powerful performance in “A Modern Musketeer,” emphasizing screen presence over range. His noted enthusiasm and “pep” shines throughout the movie. On the more somber side, Victor Sjöström gave a classically Swedish performance as a man lost at sea who returns to find that his life has been taken away in his absence. He shows multiple layers of anger, pain, and frustration, and struggles with those emotions against his character’s basic decency when “A Man There Was” reaches its climax. Andrej Gromov is also a tragic figure in “The Dying Swan.” He plays an insane artist who becomes fascinated by the suffering face of a mute woman, but the moment she finds happiness, he goes mad and strangles her to get the image he wants for his painting. Finally, René Cresté established the superhero by taking on the role of Judex. In “Love’s Forgiveness,” his character is finally able to resolve the dark revenge motives he’s been carrying throughout the serial with his love of the daughter of his main enemy.

The nominees for best actor in a leading role are:

And the winner is…Victor Sjöström in “A Man There Was!” 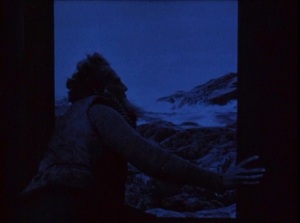 While it was far from an upbeat movie, Sjöström’s performance in “A Man There Was” surpassed the material and built it into a powerful screen experience. As I suggested above, there’s a lot going on here, and expressing all of it without recorded dialogue is an impressive trick. All the moreso when the Intertitles were limited to the words of the poem by Henrik Ibsen on which this is based. Sjöström had to convey everything that was going on inside of him, using his face, but maintaining the stoic expression of a Swedish sailor. He did a great job, and thus he is honored with this award.