Film didn’t have to become a narrative art form. Its early inventors generally saw it as a means of taking short documentary clips of actual events, or at most of creating “moving portraits” that might involve deliberate costume and lighting, but not necessarily complete stories. Experimental film makers have created a variety of non-narrative, or non-linear, movies that test the boundaries of what film “is.” But, once stories started to be told onscreen, it didn’t take long to catch on, and by 1917, this is the established and expected form, to the degree that actualities are now struggling to come up with stories to justify their running time. The people who created these stories were now highly sought-after professionals, and they were kept busy coming up with fodder for the industry.

The nominees for best screenplay of 1917 are among the best of these storytellers. “A Man There Was,” written by Gustaf Molander and the director, Victor Sjöström, takes a story of a man lost at sea to an epic level, pitting him against storms and his own worse nature to come out a hero. “The Dying Swan,” written by Zoya Barantsevich and inspired by the dance solo of the same name, tells the story of an artist driven mad by his morbid fascination with suffering, and his need to kill the woman he loves if she should become happy. Frances Marion, adapting the stage drama of Eleanor Gates for “The Poor Little Rich Girl,” added a working-class sensibility to its bratty protagonist, assuring a much more sympathetic character. Her second nomination this year comes for “The Little Princess,” adapted from the novel by Frances Hogson Burnett, and here she creates a great friendship in the characters of Mary Pickford and ZaSu Pitts, for which they seem perfectly suited (Marion and Pickford were friends, so the story was written with her, at least, in mind). The story of “Polly Redhead,” written by Eliott J. Clawson from the novel “Pollyooly” by Edgar Jepson, works with the contradictions of the British class system to produce an effective melodrama with comedic elements.

The nominees for best screenplay of 1917 are: 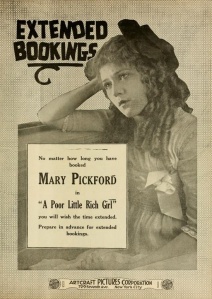 This is the first time Frances Marion has been honored with a Century Award, but I wouldn’t be surprised if it’s not the last. She was able to understand what worked for Mary Pickford, one of the biggest stars of her age, with an almost prescient intuition. The fact that she had to make fairly radical changes to the character of Gwendolyn, changes which the director, Maurice Tourneur didn’t care for but which Pickford herself fought to preserve, only makes this a more outstanding example of her talents.