This short comedy from the team of Mr. & Mrs. Sidney Drew plays on stereotypes about nurses – but also pokes fun at the men who promote those stereotypes. While it’s not an especially sophisticated example of situational comedy, it does once again demonstrate that slapstick wasn’t the only option available to the silent comedian. 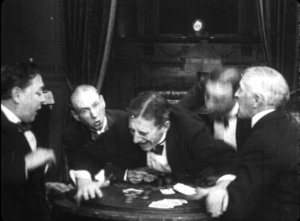 Sidney plays J. Robert Orr, a seemingly idle rich “club man” who spends his evenings in card games. One day, while walking down the street, he witnesses man having a medical emergency, which is attended to by a pretty young nurse, Helen Worth (Mrs. Drew). They exchange glances, but soon the ambulance arrives and she is whisked away. Orr is so obsessed with her that the four queens in his hand turn into images of the nurse. He fixes himself a drink and comes up with a plan, suddenly throwing himself across the table, convincing his friends that he needs medical attention. He is taken to the hospital, but when the doctor comes in to examine him, he cries, “I don’t want a doctor, I want a NURSE!” However, Helen is out of the hospital right now, attending a serious case. So, several other nurses are sent in, one at a time. Each of them is ugly, fat, old, or mannish, and he is increasingly agitated. Finally, he dresses as  a nurse to escape via the fire escape, and returns to the club. His friends now think he has gone nuts, so they take him to another doctor, who pronounces that he has “nurse-itis.” He goes to get Helen to help attend the case, and Orr hides beneath the covers, terrified of what he may see. When he sees it is her, he softens and smiles. A quick edit covers his recuperation, and he proposes to the girl, who gladly accepts. The end. 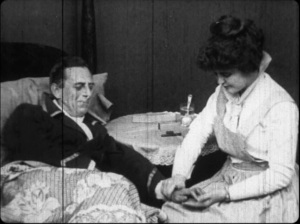 The fact that the stars really were married may have helped soften the blow of this premise of this movie, which essentially involves a man stalking a girl he saw once and ignoring the professional qualifications of her and her colleagues, seeing them only as “ugly” or “pretty.” For modern viewers, however, it doesn’t help that Sidney is a good 20 years older than his wife (whose name I always think of as “Nancy,” for obvious reasons, but it was really “Lucille”). He does a pretty good freak out over the disappointment, and one does laugh a bit at his antics, but as I said, it’s not terribly witty. The movie also cross-cuts between his torment and Helen’s actual work, but this serves no obvious purpose, except to remind the audience of the real object of his quest. Certainly not the worst movie of 1915, but not the best, either.

I have not found the whole move for free on the Internet. You can watch a short clip of it: here.