With the last post of 1917 comes the first loss of American military lives in World War One. We also see developments in Russia continuing apace, with Finland and Estonia breaking off from the old Empire, and the establishment of secret police forces that would soon become a defining feature of the post-revolutionary political scene (as the were of the Czarist one as well). I hope all my readers had a good 2017, and I wish you a happy new year as we move toward 1918, the year of active American involvement in the World War and also the Influenza Epidemic. 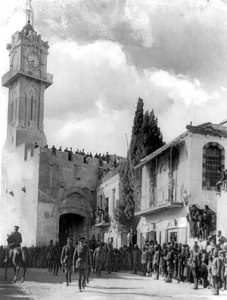 U.S. Navy destroyer USS Jacob Jones is torpedoed and sunk on December 6 in the Atlantic Ocean by German submarine U-53, killing 66 crew in the first significant American naval loss of the war.

The British Egyptian Expeditionary Force accepts the surrender of Jerusalem on December 9 by the mayor, Hussein al-Husayni, following effective defeat of the Ottoman Empire‘s Yildirim Army Group during the Battle of Jerusalem.

General Edmund Allenby leads units of the British Egyptian Expeditionary Force into Jerusalem on foot through the Jaffa Gate on December 11.

Egyptian Expeditionary Force secures the victory at the Battle of Jerusalem on December 30 by successfully defending Jerusalem from numerous Yildirim Army Group counterattacks.

Badge of the Cheka

The Senate of Finland officially declares the country’s independence from Russia on December 6.

The Cheka, or All-Russian Emergency Commission for Combating Counter-Revolution and Sabotage, is established in Russia on December 20. It begins as a small organization of about 40 officials, but will expand to 200,000 operatives within four years.

A local plebiscite supports transferring Narva and Ivangorod (Jaanilinn) from Petrograd Governorate to the Autonomous Governorate of Estonia, passed on December 23.

Annie Besant becomes president of the Indian National Congress in December, to hold the position for one year.

Two freighters collide in Halifax Harbour at Halifax, Nova Scotia and cause a huge explosion that kills at least 1,963 people, injures 9,000 and destroys part of the city on December 6 (the biggest man-made explosion in recorded history until the Trinity nuclear test in 1945).

After nearly 20 years of planning and construction, the Quebec Bridge opens to traffic (the bridge partially collapsed on August 29, 1907 and September 11, 1916).

Jesse Lynch Williams‘ Why Marry?, the first dramatic play to win a Pulitzer Prize, opens at the Astor Theatre in New York on December 25.

Hurd Hatfield, (actor, in “The Picture of Dorian Gray” and “The Boston Strangler“) born December 7

Frankie Darro, (actor, in “Wild Boys of the Road” and “Pinocchio“) born December 22.