It’s practically the end of the month, and I’m only now getting around to an installment of the Century News! Part of the reason I’ve hesitated this month is that so much happened, and it is so momentous, that it’s almost impossible to approach. The second Russian Revolution that started the Russian Civil War and ultimately created the USSR would transform history on nearly all levels. Most relevant for this blog: it would wind up having a huge impact on cinema history, leading to the rise of montage and directors like Sergei Eisenstein and Dziga Vertov. More immediately, however, it meant a sudden collapse of the thriving Russian film industry as the blockade prevented new film stock from entering the country and many of the actors and producers went into exile. One thing that this project has discovered is that pre-revolutionary Russian cinema cannot be dismissed as “backwards” or “bourgeois.” Personally, I regard Evgeni Bauer as a genius equal or perhaps even superior to Eisenstein (though there are many who would disagree). Certainly, Soviet cinema never produced an actor of the stature of Ivan Mosjoukine.

It’s hard to discuss this period also without thinking of present-day politics. The rapture over the “Fall of the Soviet Union” has largely given way to fears over a new Russian superpower and its influence on the West. I’d rather avoid making any definite statements about how this is or will play out (that’s not the topic of this blog), but maybe some insights can be gleaned by thinking about how Russian history has played out on the world stage over the course of the past century. Here are some headlines that might start that process. 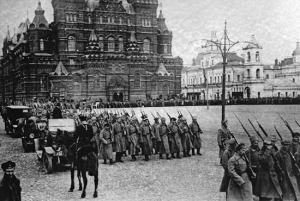 The British XXI Corps of the Egyptian Expeditionary Force begins the Third Battle of Gaza on November 1. On November 7, XXI Corps occupies Gaza after the Ottoman garrison withdraws.

The British Desert Mounted Corps begins the Battle of Tel el Khuweilfe in the direction of Hebron and Jerusalem on November 1. The Battle of Jerusalem begins November 17 with the Egyptian Expeditionary Force launching attacks against Ottoman forces in the Judean Hills.

Battle of Hareira and Sheria launched by the British XX Corps and Desert Mounted Corps on November 6 against the central Ottoman defences protecting the Gaza to Beersheba road. On November 7, the XX Corps and Desert Mounted Corps capture Hareira and Sheria, marking the end of the Ottoman Gaza to Beersheba line.

Action of 17 November 1917: United States Navy destroyers USS Fanning and USS Nicholson capture Imperial German Navy U-boat SM U-58 off the south-west coast of Ireland, the first combat action in which U.S. ships take a submarine (which is then scuttled).

British Mark IV tank, captured at the Battle of Cambrai.

Battle of Cambrai: British forces, using tanks, make early progress in an attack on German positions on November 20 but are soon beaten back.

German forces defeat Portuguese army of about 1200 at Negomano on November 25 on the border of modern-day Mozambique and Tanzania.

Militants from Trotsky’s committee join with trusty Bolshevik soldiers to seize government buildings and pounce on members of the provisional government, beginning November 6.

October Revolution in Russia: The workers of the Petrograd Soviet in Russia, led by the Bolshevik Party and leader Vladimir Lenin, storm the Winter Palace on November 7 and successfully destroy the Kerensky Provisional Government after less than eight months of rule. This immediately, triggers the Russian Civil War.

The Parliament of Finland passes another “Sovereignty Act” on November 15, dissolving Russian sovereignty over Finland and effectively declaring Finland independent.

The Provincial Assembly of the Autonomous Governorate of Estonia declares itself the highest legal body in Estonia on November 15. Elections will be called November 28.

The Bolsheviks release the full text of the previously secret Sykes–Picot Agreement of 1916 in Izvestia and Pravda on November 23; it is printed in the Manchester Guardian on November 26. The agreement defined respective spheres of influence for Russia, Britain, and France in the Middle East, ignoring any claims of national sovereignty by the natives.

The Bolsheviks offer peace terms to the Germans on November 28.

Zionism: The British Foreign Secretary Arthur Balfour makes the Balfour Declaration proclaiming British support for the “establishment in Palestine of a national home for the Jewish people” with the clear understanding “that nothing shall be done which may prejudice the civil and religious rights of existing non-Jewish communities”.

Middle East:  Iran (which has provided weapons for Russia) refuses to support the Allied Forces after the October Revolution.

Women’s Suffrage in the United States: Women win the right to vote in New York State on November 7. On November  15, in a “Night of Terror” in Virginia, influential suffragettes from the Silent Sentinels are deliberately subjected to physical assaults by guards while imprisoned.

Nine members of the Milwaukee Police Department are killed by a bomb on November 24, the most deaths in a single event in U.S. police history until the September 11 attacks in 2001. 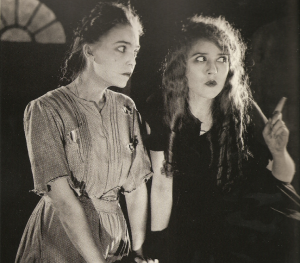 All Aboard, a Harold Lloyd short released November 25.