This imagery of the 14th Street area that would soon become a hub for the American film industry was actually taken for the French film company Lumière, who had sent out “stringers” with cameras all over the world to get exotic and exciting footage. What is perhaps most exciting today is that the area still looks familiar. 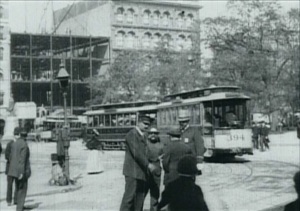 The camera is set up across from the park, apparently facing Fourteenth Street from somewhat north, and angled slightly to the East. We can see two buildings (one is under construction) and the edge of a third on the left hand side of the screen. Buildings to stage right are obscured by trees. There is a corner (15th street, if my geography is correct) with a lamppost visible, and streetcar tracks wind around that corner There are several people visible at this corner, including a policeman and a man in a different uniform, possibly a streetcar conductor. We see a streetcar wheel around the corner as the policeman directs pedestrian traffic. Once it is gone, a large number of men and women in various kinds of clothing cross the street. Wagons pulled by horses go by and other streetcars travel up the street without turning at the corner.  The man in the other uniform sometimes appears to assist in conducting pedestrians safely across the street. At the end, the policeman, the conductor, and another man all stare at the camera as another streetcar goes by.

I always enjoy seeing these early movies of the city I grew up in. The scenes are both familiar and unfamiliar. At the time of this movie, Emma Goldman had not yet given her anti-war speech at Union Square, but it was obviously a thriving and busy part of the city. This is one of the most active of the early Lumière pictures, with something going on in nearly every part of the frame, and you have to watch it a few times to catch everything. This is a great movie to contrast with the films shot in Paris by the Lumières, both in terms of the fashions, and the bustle of New York as compared with the often leisurely pace of Parisians.