One of the first films shot by the Lumière brothers (although not included among the original ten screened at the first screening of their movies in December, 1895), this movie was remade by Georges Méliès and also by the Lumières themselves. 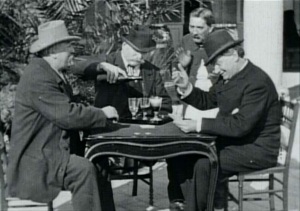 A group of three men sit at a table on a porch or patio, rapidly throwing cards down as their game progresses. One of them calls over a waiter while the others collect up the cards for a new hand. The waiter scurries off and returns with wine and some glasses on a tray, setting the whole out in front of the man who ordered. He opens the wine and begins pouring while the waiter watches the other two men playing. The wine is distributed among the men after another hand rapidly concludes, and the waiter gestures with excitement as one of them card players wins. Each man downs a good bit of wine, and the waiter continues applauding. The men set down their glasses and begin another hand as the film ends.

The waiter is really the most interesting character in the movie. He is very animated in his interest in the game, and gives the audience a kind of emotional center to what would otherwise be a pretty boring minute of footage. He seems much more invested in the outcome of the game than either of the players, and is also very eager to run and get the wine. The other men are much more subdued, although they do take a healthy draught of their wine.