This early short from Lumière demonstrates the conditions at London zoos at the turn of the century, and also serves as an early nature documentary. It is one of the “location” movies that the Lumière brothers made by sending men with cameras all over Europe and the world. 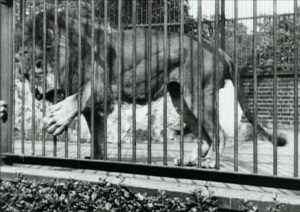 A male lion is shown in a cage at quite close range, while a zoo attendant tosses small pieces of meat into the cage. The lion eats them, but also takes occasional swipes at the attendant’s hand when he is too slow to toss fresh pieces inside. The attendant moves around the cage, trying to find a better position from which to toss, but has to move back when the lion follows him out of camera range.

The small lion cage will probably upset animal lovers today. It reminds me of the cages that big cats were kept in at the Central Park Zoo when I was a child, though happily that zoo has become more humane in recent years. I suspect that the zoo worker would have preferred to stand at a better distance from the cat’s claws, but for the purposes of the film he needed to be close. The animal is quite impressive and large, and looks like he could take the worker’s arm off if he wanted to. I also imagine that the small pieces of meat were a convention of the movie – surely you would usually give an animal this size something more to chew on.