This Civil War melodrama is a short from the Champion Studio in Fort Lee, New Jersey that was screened at this year’s Cinecon on Monday, September 3. As always with those, I have only seen the film once, and have only my notes and memory to work from in reviewing it. 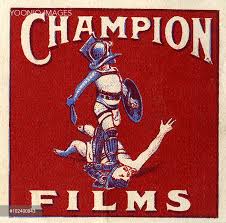 A young girl is seen in her home. Her brother enters in a Confederate uniform and she makes the usual tearful protestations. The family is supportive, but sad at the development. We then cut to a battle scene, shot so that we see only the Confederate side at first. Smoke and some explosions show us that they are under fire, and they fire rifles at enemies off-screen. Then we see “her lover,” who is among the Union forces, shown in similar fashion, and they fire at the opposite side of the screen, giving us a sense that the two sides are in conflict. Finally, they meet, and a full-fledged (but quite small) pitched battle takes place in a static shot. The lover is wounded and separated from his companions, and forced to flee the Rebels. He runs to the girl and begs for shelter. She hides him in a closet and tries to cover when her brother and some other men come searching for him. The brother realizes where the man must be hiding, but when he goes to find him, the girl grabs his rifle and points it at his chest, keeping the Confederates at bay for an hour while the lover escapes. Then the war ends and the family is reunited. When the Northern lover returns, the former Confederate welcomes him to his home.

An interesting dilemma is somewhat weakened by the easy resolution at the end. It seems to me that the sister would have been arrested and possibly lynched for collaborating with the enemy, and even assuming no legal or extra-legal difficulties, the brother has every reason to resent her threatening his life and to hold a grudge after the war. Alternately, it seems as though he and his men should question whether she really would shoot her own flesh and blood, and they likely would have called her bluff on the spot, possibly with tragic results that would not be so easily forgiven. But, I may be asking a bit much of a ten-minute melodrama. The director has rather ambitiously tried to tell a sweeping story of the war in a very simple format, and in places this is quite clever. At first I thought it was a bit cheap, showing the battle from one side only, but once I saw the other side and then the final clash and melee, I realized what they were doing, and saw it as a good way to mirror the two sides and show how an individual soldier would experience the fighting. Once again, this shows that others besides D.W. Griffith were working with the tropes of the Civil War from an early period of cinema.

This movie has not been made available on home video or the Internet at this time.