This short film from the Champion studio in Fort Lee, New Jersey, was screened at the Cinecon film festival this year, so I was able to see it only once. It takes a sympathetic approach to Native American issues and even violates later standards about portraying inter-racial relationships. 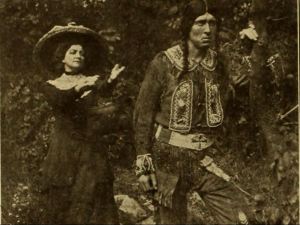 The movie begins by telling us through forward-facing Intertitles that the “young chief” is being sent to Washington (D.C.) to plead the case of the tribe to congress. Each scene in the movie consists of a single shot, and each shot is preceded by an Intertitle which predicts all of the action that follows. A group of Senators and lobbyists plot against the Indians, to pass a “land grab” bill, and one Senator asks his daughter to “distract” the chief while he is in town, and she does her best to attract his eye. He gives a speech before a group of white men in chambers, however when it comes time to give the critical speech before the vote, she insists that he dance with her at a ball. He rushes in too late to speak before the vote and accuses the Senator of “theft and prostitution.” When he returns to his tribe, they strip him of his war bonnet and prepare to kill him with tomahawks, but at the last moment the daughter emerges from the forest with a letter from the President, promising to let them keep their land “for all eternity.” The daughter now tells the chief that she loves him and wishes to stay with his people. They kiss.

Although the movie attempts to give a more balanced view than many of the time, it still comes across as very simplistic in its portrayal of both people and situations, and is very old-fashioned in its approach to storytelling. By 1910, it was not unusual to see more of the story told through visuals, or at least to have the Intertitles act as adjuncts, rather than narrators, to the action on screen. The Indians are consistently in full war-dress, although these costumes are the only elaborate props in the movie and the sets are minimal. I think we see four or five different sets, and a lot of the action takes place in a sparse hallway outside of the chambers of Congress. I’m not the only one to be surprised by the ending – according to the liner notes from Cinecon, reviewers at the time referred to the kiss as “offensive” or “repugnant.”

This rare film is not available on the Internet at this time. Please let me know if you see it online or in a home video format.