Georges Méliès is on familiar ground with this fantasy tale of the nighttime adventures of an exotic aristocrat. I doubt if his viewers learned much about India from this movie, but they were no doubt entertained as he intended. 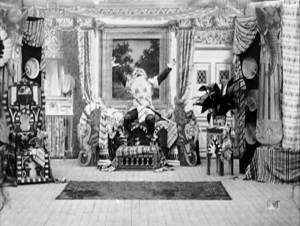 The movie begins on a standard proscenium set, decorated as the sleeping chamber of a Rajah. The Rajah himself (Méliès) sits upon an elaborate bed, he yawns and lies down, still wearing his sword and all of his clothing. A butterfly swoops into the room and disturbs his nap, fluttering about his head until he gets up and tries to catch it in a net. Failing this, he lies down again, but this time the bed and the entire room disappear, and he tumbles to the ground, finding himself in a wooded area next to a stone wall. He tries to sit on a bench, but it disappears and reappears across the stage. Each time he tries to sit on it, he falls down again. Then, as he tries to approach it a dead tree appears in his path. He tries to pull it up, but a devil’s head appears on it and it starts waving its limbs like arms. He pulls out his sword to challenge it and it turns into a man with devil horns, who grabs the sword and dances around to mock the Rajah. The Rajah tries to wrestle him, but he disappears in a puff of smoke. After recovering from this, the Rajah finds himself confronted by a woman in a robe. He falls to his knees and professes love, but the woman refuses him. She summons other women, similarly skimpily attired, and they do a dance that involves twirling and knocking the Rajah to the ground. The Rajah manages to get up and run away, but even more women join the chase and soon the screen is filled with faerie-like young girls. They form a circle around the Rajah and beat his head with sticks. He is led up a scaffold to be beheaded. He fights with the executioner, but suddenly finds himself in his room, beating on a pillow. He falls to the floor once again and looks around, realizing that the entire experience has been a dream. 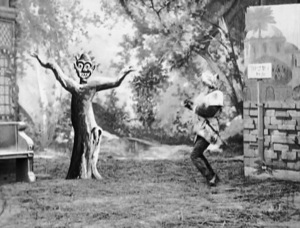 This is a pretty standard Méliès short, with the main character plagued by things that appear and disappear at random, unable to gain control of his situation, and frequently leaping and tumbling for comic effect. Like all of them, it has lovely sets and costumes, and a sense of playfulness that keeps it fresh. What stands out a bit is the scene at the end with all of the women running around the stage. Méliès rarely had so many extras – I think there may be more people on the stage at one time here than we saw in the parade for “Joan of Arc!” He always had an eye for spectacle, and obviously in this case, he was willing to go to the effort to achieve his vision, even for a simple trick film.