Douglas Fairbanks extends his brand of good-natured athletic all-American comedy into the realm of swashbuckling with this feature from 100 years ago. No doubt Fairbanks saw the potential in a story setting him as an adventurer in the Grand Canyon as soon as he read the source, a piece called “D’Artagnan of Kansas” by Eugene P. Lyle. 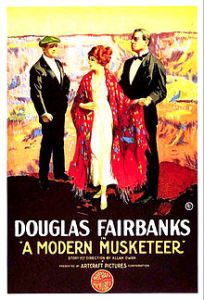 The movie begins with an extended flashback to the “Three Musketeers” which is almost a short movie in itself. Doug plays D’Artgnan, and he makes a point of mocking his own mustache and long locks in what seems to be a kind of wink at the audience. He rides into a tavern where he sees a woman inconvenienced by a nobleman of some sort, then starts a fight that leads to fencing and stunts, including leaping up to the rafters and continuing the fight from there. This is the first time I’ve seen Fairbanks with a sword in his hand (he’s had plenty of fights with guns and fists, up to this point), and it’s easy to see that he was a natural to Hollywood-style swordplay. His sword flashes and leaps, parries and thrusts, and never seems to draw any blood as he disarms and dispatches his foes. I can’t imagine that any fan of later action movies would be disappointed in this sequence or find it slow-moving. And, again, it includes Doug’s now-patented physical comedy touches, as when he grabs the beard of a sleeping drunk to steady himself during the battle. 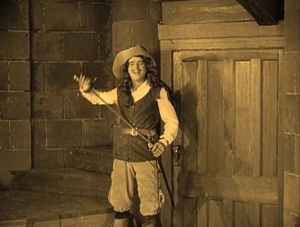 Heroic D’Artagnen-Doug now fades into modern American-Doug, who rolls up his sleeves and stalks up to the camera to present his winning smile. We see modern Doug simulate the fight of D’Artagnan, trying to rescue a girl menaced by a hood by leaping out his window, shimmying down a telephone pole, and then taking apart a speakeasy full of gangsters. This time, though, the “damsel” is unappreciative and sides with the gangsters, unleashing a fury of blows at her savior. Doug shrugs and returns to his apartment, lowering a blind that reads “Society for the Prevention of Cruelty towards Women,” meant to demonstrate that his chivalry is out of place in a modern era of “women’s rights” (and lefts). 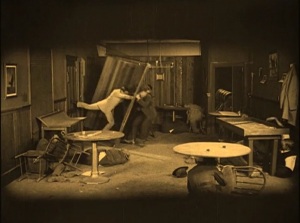 Doug’s new character is one Ned Thacker, born in Kansas at the height of a cyclone. This cyclone is shown with pretty dramatic effects of a town being torn apart, some of which may be done with models, but some shows actors running about with debris flying through the air. Ned’s mother had spent nine months reading the novels of Alexandres Dumas and praying for a boy, and she gets her wish when Ned is born. She raises him on stories of adventure, despite her husband’s concerns for the security of his property. We see that Ned, while in college, got himself arrested for forcing the chief of police to give up his seat for some old ladies. We also see that his mother still reads to him from Dumas, inspiring him to leap up and start smashing the lamps in his father’s house. Father has finally had enough and agrees to send him out into the world. Ned is so excited that he runs through the neighborhood, leaping over fences and women talking in the street, and then finally scaling the tower of the church, first climbing the ivy trestles and then finally the drain pipe to the combined cross and weathervane (an arrangement that strikes me as mildly blasphemous, but never mind). Fairbanks performs this daredevil climb with dash and determination, never slowing down until he reaches the top, never doubting that the camera will catch it all. 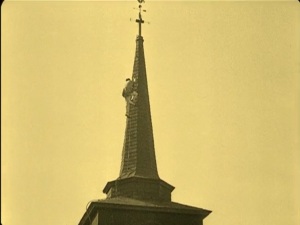 He sets off in a car his father provides, smashing a few fences along the way, and now we meet the love interest, a young girl named Elsie Dodge (Marjorie Daw), a rich socialite who is being pressured into marriage by her indebted mother (Kathleen Kirkham). The object of her mother’s attentions is one Forrest Vandeteer (Eugene Ormonde), a stuck up, somewhat sleazy Yonkers aristocrat, who likes Marjorie a lot more than she likes him. Reluctantly, Elsie agrees to accompany Forrest and mother on a trip to the Grand Canyon. But, when the car’s passage is prevented by an unexpected wash-out in the road, who should drive up to the rescue but Ned? He takes to Elsie, and to the French chauffeur, and has the bright idea to take the wheels off his tires and drive on the train tracks, hauling a railroad platform with all the baggage and Mr. Vandeteer behind. He strikes up a conversation with Elsie and they like another, to Mrs. Dodge’s clear disapproval. No one seems to think twice about the danger of being hit by a train. 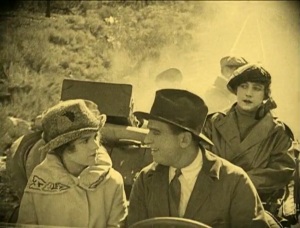 They arrive safely at the hotel and both Vandeteer and Mrs. Dodge do their best to keep Ned and Elsie apart, mostly by insulting Ned at every opportunity, but he dishes out about as good as he gets. He learns that Vandeteer is known around the community as a bigamist who keeps three wives “stashed away somewhere.” Meanwhile the audience is introduced to Chin-de-dah (Frank Campeau), a local “king” of a now largely disbanded tribe who hides out with a group of ruffians and fugitives in the cliffs. One of the fugitives is James Brown (Tully Marshall), a victim of Vandeteer’s scheming. Chin-de-dah tells Brown that he plans to “marry” a white women soon, threatening Brown with a knife when he objects. When Chin-de-dah catches sight of Elsie, of course, he decides she will be the one. Ned is trying to impress her at this time by doing handstands at the edge of the Canyon, but Vandeteer calls her away and Chin-de-dah offers himself as a guide to Ned, hoping to get at Elsie. Ned sees there is something wrong about the situation and declines, rebuffing him with mildly racist jokes and a cowardly rock thrown behind Chin-de-dah’s back. Chin-de-dah recovers soon enough to offer himself to Vandeteer the next morning. 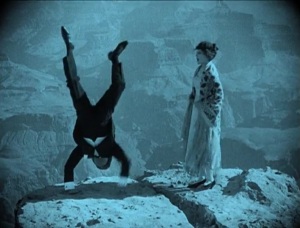 Everyone is now getting ready to ride into the Canyon, but Vandeteer disinvites Ned and James Brown catches sight of the party getting ready to leave, putting two and two together mighty fast. He tells Ned that Chin-de-dah will kill Vandeteer and “marry” (which is to say rape) Elsie, and begs Ned to let him do it so that he can have revenge against Vandeteer. Ned’s chivalry, of course, would never permit such a thing. He convinces Mrs. Dodge that she’s made a bad choice through his “boyish charm” and then sets out with Brown to pursue the group. He manages to get ahead of them by rappelling down a sheer cliff of several hundred feet, and finds the camp where the gang hides out. He gets the drop on Chin-de-dah, emerging from hiding with a gun just as he has announced his evil plan to Vandeteer and Elsie. Chin-de-dah’s gang comes along now and a fight breaks out, with Ned getting the best of them, but having to break off and help the threatened parties escape. There’s an exciting chase through a ravine and a shootout, and soon Ned is ready to lift the captives to safety on the rope he climbed down, with Brown hauling them up on his horse. Once they are safe, Brown wants to kill Vandeteer, who falsely incriminated him in Vandeteer’s own scam and stole his wife and children. Vandeteer ends up clinging to the cliffside, kept from falling to his death only by Ned’s grip. Under Ned’s direction, he writes a note exonerating Brown. Ned persuades Brown to let Vandeteer live, and promises to split the reward with him. Once they are alone, Elsie kisses her rescuer. 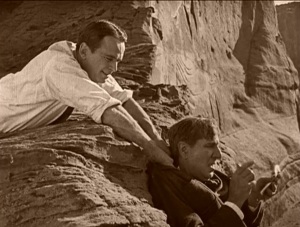 Now that’s enough action for a swashbuckling fan of any era, even if Doug never picks up a sword again after the first seven minutes. The overall theme of the movie is that chivalry isn’t dead and a man’s man can take the world by storm and handle any situation with dash and derring-do. There’s an undercurrent, brought out particularly in the exchanges between Ned and the French chauffeur, that American innovation and vivacity can win the war against Germany (US soldiers were recently arrived in France, when this movie hit the screens). But, unlike “The Little American,” this movie is made to entertain, not to proselytize, and we don’t get any stereotypical German baddies to hate. We do get a racist portrayal of a Native American, but it’s less offensive than the drunk Indians of “Wild and Woolly” and nowhere near as bad as the Latinos of  “The Americano.” Chin-de-dah is (mostly) a villain because of what he does, not because of what he is. Similarly, Elsie is pretty much a helpless damsel-in-distress who does little to participate in her own rescue, but at least she’s got enough sense to not like Vandeteer from the outset, and to tell her mother as much. I was surprised that she was referred to as a “flapper” in the Intertitles, a term I think of as postwar (it sort of seemed like a movie using the word “hippy” to describe a long-haired youth in 1957), but I’m not certain if these titles were original or reconstructed. 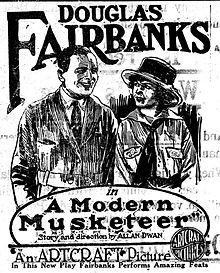 What stands out to me about the film is the pacing, which is a tribute not only to Fairbanks’s stuntwork and personality, but also the film’s direction, by Allan Dwan, and the editing. The dramatic location is exploited to the fullest as well, with cliffs set up to make the peril of our actors seem much greater than it probably was, and long shots that show genuine drops as well. I suspect that Doug was dangling a dummy, rather than an actor, in the long shots of the final sequence, but the sense of vertigo was just as effective for me, as it was when he started doing handstands at the cliffside. Shortly after that, he trips, and one foot goes slightly over the edge, and my palms were as sweaty as the character’s when he crawled slowly away from the edge. 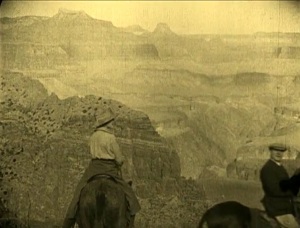 As I mentioned at the outset, Fairbanks was trading now on a very successful brand of action-comedy, and this movie is an extension of that into new territory. He had often played the rich modern American who dreams of adventure and proving himself worthy, as in “Wild and Woolly” but also “His Picture in the Papers” and others. This movie made the connection between this ideal and the older concept of swashbuckling more explicit – we even see the word “swashbuckling” in an early Intertitle (again, assuming they are authentic). I wouldn’t go so far as to call this the “first” swashbuckling film – “first” is always a dangerous claim, and I haven’t done enough research to authenticate it at any rate – but as Fairbanks moved into that genre in the twenties, I’m sure that what he learned here was valuable for the transition, and thus this movie has influenced concept significantly. 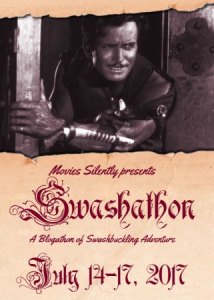 This is my entry in the “Swashathon,” hosted by Fritzi at Movies Silently. Check out the other entries here!

This movie is available for streaming from Flicker Alley and Vimeo: here.