Georges Méliès really shows off in this trick film from early in his career, reproducing himself no less than six times on the screen. The film is light on content, but still an amazing accomplishment in terms of in-camera effects. 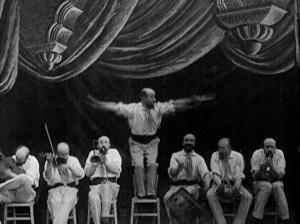 The movie begins with a standard proscenium frame; Méliès stands in front of a row of seven chairs. He counts them off for the audience, then sits in each one sequentially. Each time he gets up, an image of him sitting in the chair remains behind. Each seated image magically has a musical instrument in its hand when it appears. These include cymbals, a trombone, a flute, a drum, a violin, and a guitar. The image in the middle has no instrument, but stands on his chair waving a baton. Now all of the Méliès-clones begin playing their instruments, appearing to coordinate and play in time. After a few seconds, they stop, stand up and take a bow. After they take their seats again, the “conductor” image in the center gestures for them to move into the center. The outer images move on top of the inner ones until there is only one image left in the center again. He then makes the chairs disappear with a gesture. He dances around the stage a bit and makes them reappear. Then he banishes the outer chairs until there is just one chair left, which he sits on as a large fan rises up behind him on the stage. He and the chair descend through a trap door. Then he suddenly appears behind the fan and leaps over it, disappearing in a puff of smoke when he hits the stage. The fan then re-descends below the stage and reveals Méliès standing behind it. He steps forward to take a final bow for his magic tricks. 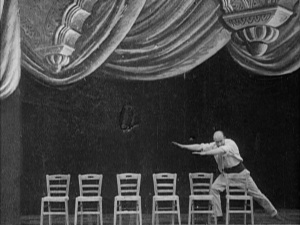 Most of this movie is a pretty standard Méliès magic-show with things whimsically appearing and disappearing, but the main attraction (and the basis of the title of the film) is the part at the beginning where we see seven images of him performing together. This was done, of course, through multiple exposures, and required seven precisely timed takes on the same strip of film. It is quite an accomplishment, maybe all the more impressive to us today who know how it was done than to audiences seeing it for the first time with no knowledge of motion picture photography. If you look carefully, you can see that the multiple images “bounce” up and down a bit, not in sync with each other (it’s especially obvious with the stationary chairs after the Méliès-images have disappeared). I assume that this is because of the natural jiggle of the hand-cranked camera, which would jiggle at different times in each take. When the images stand in front of one another, they tend to be transparent, and the leaping Méliès at the end is also transparent in front of the fan. This is also a function of the multiple exposures. These technical “flaws” in no way lessen the fun or the impressiveness of the film, but they are indications of the hand-crafted, improvisational approach of Méliès’s camera trickery.