The final episode of “Judex” lives up to its title by being more about love and forgiveness than about crime and revenge. It serves almost as more of an epilogue than a discreet chapter of the serial. 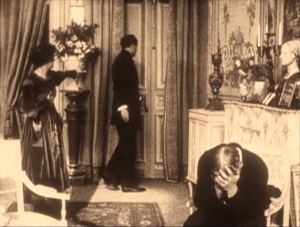 The movie begins at the seaside villa which has served as Judex’s headquarters for the final parts of the story. Judex (René Cresté) and his brother (Édouard Mathé) lead Favraux (Louis Leubas) into a room and put him in a chair, where he contemplates his fate alone, and breaks down crying. Shortly, Judex leads Jacqueline (Yvette Andréyor) into the room to see her father. When he leaves the room, she reaches out at first towards him as if she cannot bear his departure, but then turns her attention to her father, embracing him. Judex rejoins his brother and mother, Countess de Tremeuse (Yvonne Dario), looking downcast. His mother assures him that Jacqueline now knows the truth, and that she loves him. The Countess now brings Le Petit Jean (Olinda Mano) to Jacqueline and Favraux, and the child seems to break the grandfather from his stupor, as he again accepts his role in the loving family. His expression resumes its blank look when Judex walks into the room and asks for Favraux to pronounce judgment upon him. Favraux asks to see the Countess first. Judex leads Favraux to his mother, and Favraux breaks down and begs her forgiveness. The Countess informs him that he is forgiven, because of the harm that revenge will bring to the innocent Jacqueline and Jean. 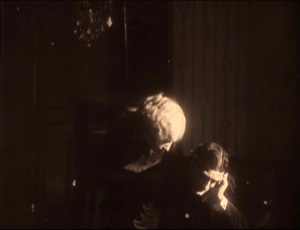 Meanwhile, the Licorice Kid (René Poyen) has found Robert in the yard and asks to see Cocantin (Marcel Lévesque). Robert takes him to the marina, where Cocantin and Daisy Torp (Juliette Clarens, if my deductions are correct) are returning from their adventures. Cocantin, still wearing Daisy’s hat, introduces her as his fiancée. The Licorice Kid appears to approve of his choice. The next day, Kerjean (Gaston Michel) is walking on the seaside when he finds the body of a woman – it is Diana Monti (Musidora), who evidently drowned in her attempt to escape justice the previous night. Michel, who has been deprived of his son by this woman’s machinations, appears to be bitterly satisfied at the discovery. 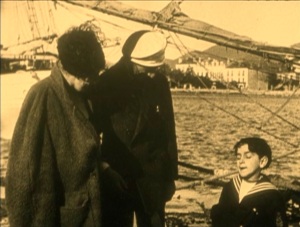 The official “Epilogue” is now announced with an Intertitle, and we see Judex’s now united family, represented by Robert, the Countess, and Le Petit Jean walking in the woods. They find Kerjean sitting sadly at the seaside and Jean runs up to him and kisses him, which brings him out of his reverie. Although he has lost his son, it seems he has a place with the family and can still partake of their love. Favraux, we learn, chooses to live in ongoing isolation without reclaiming his fortune. We see him pruning a tree in his old garden. He interrupts his work when a poor girl comes begging at the gate, and he gives her some money – proving his repentance is sincere, since the series began with him turning away a similar beggar in the Prologue. Next we see Cocantin and Daisy Torp in wedded bliss, with the Licorice Kid as their officially adopted ward. Cocantin proves his love by demonstrating that he is learning to swim on a tabletop. Finally, Judex and Jacqueline are shown in a happy embrace, having overcome everything to be together in one another’s arms. 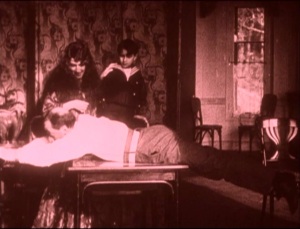 And so ends “Judex,” the third of the crime serials directed by Louis Feuillade, perhaps France’s most important director of the late Nickelodeon period. I’ve seen all three now, and, due to the nature of this project, I wound up seeing them in the sequential order of their release: first “Fantômas,” then “Les Vampires,” and finally “Judex.” During that time I’ve discovered that each one has its fans and devotees, and that there isn’t agreement on which is the “best” of the three serials. I usually try to avoid reducing my reviews to simple analyses of whether I like a film or not, but I have to admit that for me the progression has been pretty much downward. “Fantômas” remains my favorite, then “Les Vampires,” and “Judex” is at the bottom of the list. This despite the fact that the filmmaking techniques, and especially the editing, decidedly improved over time. I have a theory that which one will be your favorite depends on which one you see first. They’re each so different that if you go into the second and third ones expecting more of what you got in the first, you’re bound to be disappointed. 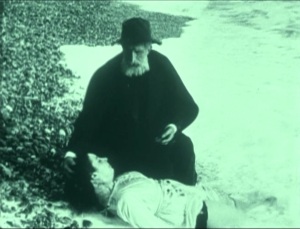 That’s a compliment to Feuillade, really, a reflection of the breadth of his skill and imagination. He did not simply make three serials that were all the same, he made three very distinct cinematic experiences, linking them only in terms of cast and themes. And, just because “Judex” seems to me the least of the three Feuillade serials, doesn’t mean I haven’t enjoyed watching it. It’s easily one of the best serials of the period, even if it isn’t “Fantômas.” (I have yet to meet a silent fan who regards “The Perils of Pauline” with the devotion so many give to these movies. “Judex” was made in part as a response to criticism that Feuillade’s earlier crime films had glamorized criminals and de-emphasized the heroes. I think that’s part of why it seems less modern and interesting to me. I think Feuillade tries so hard to emphasize redemption and love that he forgets to include enough action, and his fascinating villainess winds up being cast off, literally killed off as an afterthought at the end of the series. But, in doing this he also more or less invented the concept of the superhero, an iconic figure that the world would spend the next century exploring and re-examining. That’s an accomplishment worth celebrating.

You can watch it for free: here (episode incomplete. I have not found the complete episode for free online. If you do, let me know in the comments).