This early educational short was aimed at children in Brooklyn, and produced by the Brooklyn Rapid Transit Company. It depicts a variety of unsafe activities to try to caution children to be careful in traffic, and, incidentally, to exculpate the streetcar company from responsibility for accidents.

The movie begins by showing us the educational work that the company is engaging in, including setting up Safety Patrols (student crossing guards) and showing films in a classroom. Reversals are used during a lecture to show the reactions of some students to the presented material, and a double exposure allows us to see both the students watching the film and the film in progress at the same time.  After showing a parade of schoolchildren marching out of their school to take up positions on the Safety Patrol, the real meat of the movie gets going: depictions of unsafe behavior and the accidents that result.

The first behavior we are warned about is “hitching” by jumping onto the fenders of moving vehicles to catch a ride. We see two children do this on a streetcar, ignoring a warning from a conductor. When one leaps off, he runs in front of an automobile and is run over. Next, we see a group of children playing a game in the street that seems to involve hitting a piece of wood into the air and catching it. The kids pay little heed to the traffic in the street, focusing on their game and one another, then moving aside at the last minute as cars or streetcars go by. One waits too long and is run over, but he’s OK because of the “wheelguard” the company uses. The conductor fills in a report on the incident, but the child grins sheepishly throughout. When the streetcar moves on, the group gets ready to start up the game again, but the recent victim suggests moving to a nearby vacant lot, where no traffic is likely to come by. He gives a brief speech (via Intertitles) about looking both ways and not playing in the street.

Now the subject switches to adults who also need to be cautious. We are shown the right and wrong ways to disembark from a streetcar, with a pratfall as the result of the latter. We also see a man trying to leap onto a moving streetcar, which is prevented by the new “safety doors” that close when the streetcar is in motion. This is displayed by a series of reversals from inside and outside of the streetcar, in rather advanced editing for 1913. They also demonstrate the new “no-step” entryway to modern streetcars, which reduces the likelihood of tripping. Finally, we see some “bad drivers” who fail to give right-of-way, ignore traffic cops, and veer all over the road. One of these winds up side-swiping a streetcar and crashing. We then see the wreck, and the bodies of the driver and his passenger being pulled from it. 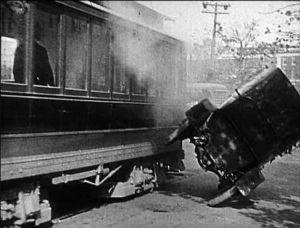 The urban environment was becoming more dangerous in the early twentieth-century, in part due to the introduction of the automobile, but also because of crowding and a lack of outdoor spaces for children to play in. I was surprised that the streetcar company would openly advocate trespassing on a vacant lot as a safer alternative to playing in the street, but presumably Brooklyn neighborhoods had few parks at the time. That shot, by the way, is fascinating, because behind the lot we can see a row of tightly-packed townhouses with laundry lines, something rarely caught on film at the time. In fact, despite all the production going on in New York, this is a rare look at Brooklyn residential areas (we’ve had some Coney Island movies in this project, so it isn’t our first trip to Brooklyn, but it’s very different from that). 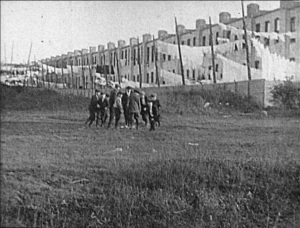 Fans of the later era of “scare films” for driving safety, like “Red Asphalt” and “Mechanized Death,” will be interested to know that there was such an early precursor to these movies. While the accident-victim-footage shown here is comparably tame, it does appear that the actors were put at risk to make convincingly frightening reenactments. Directors showing car accidents in narrative films at the time were relatively cautious by comparison, sometimes to the point of undercutting the illusion, as in the case of “The Ex-Convict” and “Police Chasing Scorching Auto” where the “rescued” children appear to have been at no risk whatsoever. I was also impressed by the advanced use of editing in this movie, which made it livelier than such a plotless movie would normally be. The commentary from the “Treasures III” disc notes the very naturalistic acting of the performers, this is especially true compared to the wooden line-reading of educational films from the sound era, but catching naturalistic performances from children was always easier when they didn’t have to memorize lines.