The Underground Passages of the Chateau Rouge (1917)

This week’s episode of “Judex” continues the theme of mercy versus vengeance from the previous story and also provides another cycle of capture-and-rescue, so common to serials throughout their history. As a movie, it is roughly divided between the two plotlines. 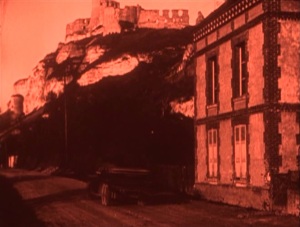 As the movie begins, the Countess de Tremeuse (Yvonne Dario) demands that her son Judex (René Cresté) show her the prison cell where the banker Favraux (Louis Leubas) is being held. He brings her to the Chateau Rouge and conducts her into the secret hideout beneath the Chateau, where they meet Judex’s brother Roger (Édouard Mathé) and their new collaborator Kerjean (Gaston Michel), who was also wronged by Favraux. Not content with viewing Favraux through the camera-mirror, the Countess asks to visit his cell. When they go in, Favraux grins blandly and plays with a chain on his wall. They realize that he has gone mad, and Judex asks if he has not suffered enough, but the Countess is conscious of her oath to her dead husband and does not reply. Evidently she needs more time to think about the situation.

Meanwhile, Judex receives a note from Kerjean’s son (Jean Devalde), who, under the name of Morales had been acting as a villain. Now, he informs Judex that he plans to enlist in the foreign service in order to atone for his error. Judex looks concerned at this news. We soon see that he was right to be worried when Morales shows up at the home of Diana Monti (Musidora) to say goodbye on his way to the enlistment station. Of course, she seduces him with promises of the two of them living together in wealth, and so he divulges the secret location of Favraux. Soon, Monti and her ally the Marquis de la Rochefontaine (Georges Flateau) have gathered a group of thugs to make a raid on the castle.

This raid seems to go well when the thugs are able to chloroform the figure sleeping in the cell bed and take him off in a car without anyone detecting them. Morales hangs around to “establish an alibi” and discovers that Favraux is actually sleeping in his father’s bed! Robert informs him that when they discovered Favraux’s condition, they gave him the nicer bed and it was actually Kerjean that was kidnapped. When Monti discovers that they’ve brought her the wrong man, she tells her goons to go dump him in the river (this is her solution to everything).

Now, Judex and Cocantin (Marcel Lévesque) both go out to investigate Monti’s hideout and they see the gangsters trying to escape with their victim and pursue in a car. The car is overtaken and a shootout occurs in which the Marquis is killed. Kerjean is liberated, however, and despite the tragedy it appears that the good guys have the upper hand once again.

This episode lacks some elements I look forward to in the series, notably the Licorice Kid and Le Petit Jean. I can’t complain that this episode lacked in action or suspense, but once again I’m left with the feeling that the criminals are annoyingly ineffectual. They almost never seem to pull anything clever, in contrast to “Fantômas” or the various leaders of “Les Vampires.” At least Musidora had a chance to use her feminine wiles. I still don’t understand why she expects to get rich by helping Favraux, and Morales’ idea of establishing his alibi by announcing his presence literally at the scene of the crime (when everyone thought he was at the Front) makes no sense at all. But, it a Feuillade serial made sense, it wouldn’t be half as much fun.