An origin story at last! “Judex” is a bit past halfway, and with this episode, the serial tells us the reason that he is…Judex. 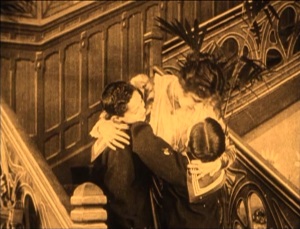 The movie begins by showing us a woman we have not seen before, living on an estate, who receives a telegram from her son “Jacques” telling her that he is coming. This is the Countess de Tremeuse (Yvonne Dario), and the telegram opens a floodgate of memories, which we see in flashbacks. “At a time when her hair was blonde instead of gray,” the subtitles tell us (actually it looks brunette to me, but whatever), she was happily married and raising two sons of the nobility. But, her husband had dealings with the corrupt banker Favraux (Louis Leubas, here made up to look much younger than in earlier episodes). He became romantically interested in the young Countess, and tried to leverage his financial power to gain her favors. When the Countess objected, he pulled out all of his support and the family was ruined. This results in her husband’s suicide. Moments after the Count’s impetuous act, news comes that an African gold mine has paid off and so the family will not face poverty after all. When the Count is laid to rest, Madame de Tremeuse makes her sons swear that they will avenge their father when they are old enough. They do so with right-handed Roman salutes, in the style that would soon be adopted by fascists and later by Nazis. 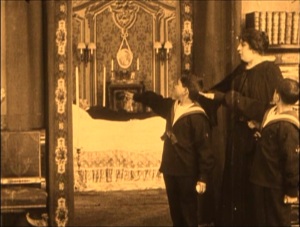 Back in the present, Madame de Tremeuse reviews the letters her son Jacques has been sending, in which he informs her of his infiltration of Favraux’s business under the identity of “Vallieres” and later of the impending death of Favraux. Then Jacques/Judex/Vallieres (René Cresté) arrives in a car, still wearing his stylish cape. He greets his mother and asks to be relieved of his oath. He confesses that he has fallen in love with Favraux’s daughter and says he would like to give the innocent woman back her father alive. She is outraged that Judex has not already killed Favraux and turns him out of her house. He leaves with a heavy heart and she promises her dead husband’s photograph that she will keep the oath. 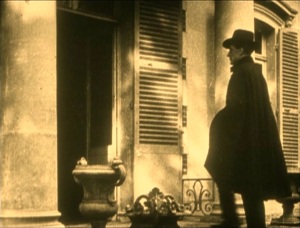 Judex returns to his own home and puts on the Vallieres disguise in order to speak with Jacqueline (Yvette Andréyor). Le Petit Jean (Olinda Mano) tells him that he wants to see his friend the Licorice Kid (René Poyen, AKA Bout-de-Zan). The Licorice Kid is living with Cocantin (Marcel Lévesque) and expresses a similar wish. He gets a call from Judex’s brother Roger (Édouard Mathé), and they make plans to sneak the Kid out of his home in a trunk. This seems to go smoothly, even though the house is under surveillance by Diana Monti (Musidora) and Moralés (Jean Devalde). However, they make a daring race in their car to catch up and are able to grab the trunk from the moving vehicle and bring it back to their hideout. They find nothing inside but linen and a note telling them “Hello from the Licorice Kid who is no Dummy!” Meanwhile, of course Cocantin and the Kid meet up with Roger Tremeuse, who drives off with the Kid. Cocantin is visibly sorry at the parting, but the Kid is eager to see his “Lil friend.” 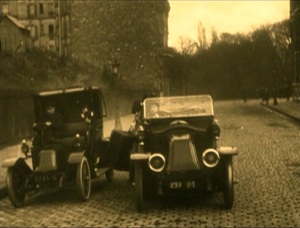 After they are reunited, the Countess arrives, demanding to speak with Judex. She gives both brothers a tongue-lashing, then forces her way past Judex when he bars the door to Jacqueline’s room. She finds Jacqueline, the Licorice Kid, and Le Petit Jean, all in their bedclothes at prayer. The scene is of such serene innocence that he heart melts, and she begs pardon for the intrusion, introducing herself as Vallieres’s sister. She retreats to a chair in another room to think about the situation, but Le Petit Jean follows her and asks for a kiss, which she cannot refuse. 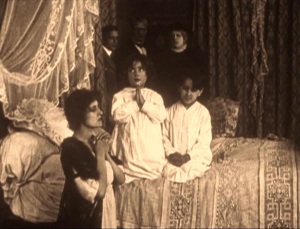 This episode focuses on the emotional tension of whether the aristocratic Countess will accept her son’s love for a bourgeois woman, particularly one whose parent has brought disgrace and tragedy to the family name. This is a pretty typical nineteenth century “Gothic” storyline, and it makes the episode seem less “modern” than the crime dramas we think of with Louis Feuillade. We do have one scene of action when the criminals try to nab the Licorice Kid, but that is resolved quickly and tends to rather minimize their threat. It feels like Monti and Moralés are being sidelined as the story gets more interested in Judex’s family life. But, as I said before, at least now we have a sense of who this mysterious crime fighter is and what motivates him through his origin.

Apart from that one action scene, most of the movie takes place on interior sets of small domestic rooms with little interesting mise-en-scene. Angles are closer than in earlier movies, and the fast editing allows for a less stagey flow of action. There are no true close-ups to speak of, but the two-and-three shots we see cut the actors off around the waist usually, and faces are clear to see, making it easier for them to express their feelings without gesturing melodramatically. By 1917, audiences were demanding this kind of involvement to make a movie dramatic, and most filmmakers were responding.