This short from Biograph disproves the commonly-made claim that “Musketeers of Pig Alley” was the first gangster movie. Unlike that movie, however, it shows little noble or romantic in the behavior of immigrant criminals, instead emphasizing the decency of the police and of the victims.

The movie consists of just a few shots, mostly with the action staged at quite a distance from the camera. The first shot is somewhat closer, however, and gives us a view of the villains of the story as they write out a note demanding extortion money from “Mr. Angelo,” threatening him with property destruction and the abduction of his daughter if he fails to comply. The gangsters are clearly marked as Sicilian in their attire and appearance, and their poor education is emphasized in the badly spelled ransom note.

Next we see the interior of a shop, with signs telling us the prices of meats by the pound. To the right of the stage is a large booth with windows cut into it. The grocer comes in carrying a large animal carcass, and hangs it in the booth, indicating that this space represents a freezer, although this is clearly a convention for the stage, since there shouldn’t be windows open to the air if it was. The grocer now assists a female customer, seeming to be friendly and attentive. Then he checks his mail and finds the note. He gets up and pantomimes his distress. His wife comes into the shot and also shows her concern and finally they are joined by little Maria, their daughter who is the object of the gangster’s villainy. The grocer goes behind the counter and produces a large revolver, which only brings more tears and gestures from his loved ones.

The next shot shows a crowded New York City street. pedestrians throng the sidewalk, and snow is visible on the streets. Eventually, we notice one of the gangster characters amid the throng and shortly afterward he is approached by Maria. She stops to help him look for something on the ground, and accepts some candy from him. Then a horse-and-carriage pulls up to the curb, and the gangster grabs her and drags her aboard. Several passers-by point and run up to the scene of the crime before we cut to a shot of a different street, with a sign that indicates a “Junk Shop” in front of the nearest storefront. The carriage pulls up and the gangsters drag Maria inside the shop. This time there are no other pedestrians around.

Next we see the interior of the shop, and we return to interior stages for the rest of the film. We see Maria put to bed on a shoddy mattress on the floor by a woman who handles her roughly, and the gangsters crowd around a rickety table for a game of cards and some liquor. Maria tries to escape but is easily seen and caught. One of the gangsters has to be restrained from killing her on the spot. Back at the store, we see two detectives identify themselves to Mr. Angelo, and they hide out inside of his freezer. Now the reason for the windows is clear as we watch the men try to warm themselves inside of the cold space. They step outside to warm up, but after a moment they run back inside when the wife informs them that a gangster is coming. He holds Mr. Angelo at gunpoint while making him get the money, but he is blocking the freezer door, so Mrs. Angelo can’t let the detectives out! Mr. Angelo puts the money on the floor at some distance, so the man has to cross the floor and get to it, Mrs. Angelo then opens the door and the detectives spring into action, disarming the villain and capturing him.

The final scene takes place back at the gangsters’ hideout, where we see now that the men have gotten very drunk. The woman forces Maria to take some food and chastises them a bit before leaving. Now a note appears, dangling from a locked window, and Maria notices it and reads. She sneaks past the drunk men, unlocking the window and un-barring the door. Maria returns to the mattress and the doors stealthily open, revealing uniformed policemen who now enter the room. They wrestle with the gangsters and restrain them, and Mr. and Mrs, Angelo are reunited with their daughter.

Compared to the Edison shorts from the same period that I’ve been discussing recently, this movie has a gritty realism and some surprisingly modern elements. In part, that is because the story is “ripped from the headlines” – it fictionalizes a recent arrest of Sicilian gangsters in New York’s Little Italy neighborhood headed by a Detective Sergeant Petrosino, who had been put in charge of the “Italian Squad” in the New York Police Department. The actual detectives had spent several hours in a butcher’s freezer, though apparently they were at least fortified by hot liquids while waiting. The audience for this movie would have been a mixture of Italian immigrants and more established Americans, so it is important that the grocer and his family are made identifiable as decent, hard-working people, although there was much “nativist” anti-Italian sentiment in the country at the time. The criminals are unadulterated stereotypes – brutal, drunken, given to vices like gambling, and evincing poor command of English.

From a filmmaking standpoint, the movie is a fairly basic series of sequential images, but there are some interesting points. For some reason, both of the outdoor shots are taken from a high angle, as if cameraman Billy Bitzer were standing on top of a car or carriage. Two pedestrians stop and stare openly at the camera, one of them blocking the action the audience is meant to see, showing the impromptu nature of the location work. Biograph publicity claimed that “our actors had no little trouble in getting away from policemen” after this scene was shot, and given the reaction of the pedestrians to the kidnapping, there may be a kernel of truth in this. There is a brief pan to keep the action in view as the girl is dragged into the shop. Most of the interior shooting is at a very wide angle, showing the entire stage all at once and no camera movement. There are several places where a closer insert shot would be helpful, particularly when the note is passed to the girl in the hideout, but this was still uncommon in 1906. The tension is at its highest when Mrs. Angelo is unable to open the door for the detectives, but this is undermined by the forward-facing Intertitles, which have already informed us that this scene is of “A Clever Arrest: Actually as Made by the New York Detectives.”

Biograph is today mostly remembered as the starting-place of D.W. Griffith, who would join the company in 1908, and began directing in 1909. But, the company had a history before that and had already established itself as a prime source of Nickelodeon movies like this one, which was shot by Griffith’s main cinematographer. This movie contributed to the fascination with crime and criminals as source material for the movies, and can be seen as an early contribution to the gangster genre. 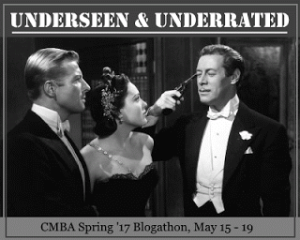 This has been my contribution to the “Underseen and Underrated” Blogathon, sponsored by the Classic Movie Blog Association. Click here to look at the other posts in this Blogathon for the more obscure works of classic film.