Perhaps appropriate for Mother’s Day, this episode of “Judex” is particularly child-and-family-friendly. Characters that have been peripheral up to now become central, and the hero himself does nothing but sulk, but the serial continues to deliver in terms of bizarre scheming and unexpected rescues. 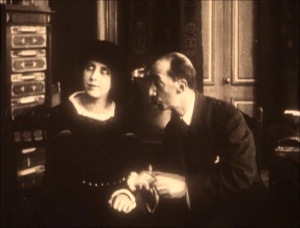 The movie opens with Diana Monti (Musidora) back in the offices of Cocantin (Marcel Lévesque). She is there for a status report on his efforts to find Judex, but Cocantin expresses disinterest in the entire affair until she reminds him that he stands to earn 100,000 franqs (somehow) if the banker Favraux can be located. Cocantin appears more interested in the lady herself than in the money, and becomes increasingly affectionate, to Monti’s evident mild annoyance. At this moment, the impoverished Marquis de la Rochefontaine (Georges Flateau) is announced. Apparently he has asked Cocantin to see if he can secure a loan from his sources, and Cocantin has not succeeded. This gives Monti an idea, and she convinces Cocantin to hide in the closet while she speaks to Rochefontaine alone. She promises the Marquis a share of the spoils if he can help her to find Favraux, then exposes Cocantin in the closet, apparently to convince the Marquis that he’s not much use. They then leave together while Cocantin looks confused and frustrated.

There is now a brief scene between Judex (René Cresté) and his brother, Roger (Édouard Mathé). Judex shows him the note that Jacqueline (Yvette Andréyor) has written, telling him that she thinks of his name with terror, and also informing him that she hopes to have her child brought to her in the home of Vallieres (who is actually Judex in disguise). Judex sighs and dispatches Roger to retrieve Le Petit Jean (Olinda Mano). This does not go quite as planned, however. The Licorice Kid and Le Petit Jean are walking to school that afternoon, when they run into two people Jean recognizes: the Marquis (who used to be engaged to his mother) and Diana Monti, his former governess. They offer to take Jean to his mother in a fancy automobile, but Jean insists that he will only come if the Licorice Kid can come too. Everyone bundles into the car, but as it starts, the Licorice Kid’s hat is blown off. He disembarks to retrieve it, but as he is running down the road to pick it up, the car roars away. He walks sullenly back home. 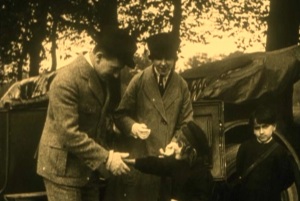 Eyeroll by the Licorice Kid

At this point, of course Roger drives up to the country home of Jean’s foster parents to pick up the child, and he is told that Jean is at school. Then the Licorice Kid runs up, out of breath and fanning himself with his hat and tells them what happened. Roger takes the Kid with him in his car. Monti and the Marquis show up at Cocantin’s office with Le Petit Jean in tow and ask him to take care of the kid until they can lure Judex to the office in order to force the truth about Favraux from him. Cocantin is not thrilled at the prospect, but allows himself to be saddled with the child, then is quickly charmed by Jean, spending all of his time playing with and watching over the child.

Everyone synchronize your eyerolls!

We next see Roger and the Kid having breakfast. Roger is reading the newspaper, and he spots an item in the personal ads addressed to “Judex.” It tells him to call Cocantin’s detective agency for information about “the lost child.” He calls and informs Cocantin that Judex will be there promptly at four PM, then hangs up. Cocantin looks very concerned, but then goes back to playing with Jean. A bit before 4, Monti and the Marquis arrive, anticipating a final showdown with Judex, but instead it is the Licorice Kid who shows up, with a note from Judex telling them to put Jean out on the balcony so that he can see that they really have him. They take the Kid into captivity as well, putting him with Jean. and the two of them step out onto the balcony. The Kid tells Jean to jump off the balcony, and he obediently does, to be caught in a blanket by Roger and Judex, who bundle him into a car and speed away.

Cocantin, who didn’t like any of this, now grows some backbone and drives Monti and the Marquis out of his office, disarming Monti and firing her gun repeatedly at them, though he misses each shot. The Kid grabs the Marquis’s hat and coat and gives them to him stiffly as he leaves. Now Cocantin and the Licorice Kid are left alone, and they each confess that they wish the other was part of their family. One more reunion takes place as Jacqueline sits in her room, seeing the same newspaper ad that addressed Judex and coming to a dire conclusion before her child is brought in by Roger. Mother and child embrace, although the audience suspects that their travails are not over for good.

Although I was happy to see more of both Lévesque and Poyen in this episode, it didn’t seem as interesting to me as some of the others. Rather too much time was taken up with how cute it was for Lévesque to wear paper hats and play with Jean, and too little with any kind of suspense or crime. I was amused by Musidora’s facial expressions as she led Lévesque on, despite her obvious revulsion for him. I have to say that Judex and Roger put both kids at considerable risk in their rescue plan. Telling a small child to leap five stories was bad enough, but they didn’t even have a plan for the Kid to get away, they just left him in the clutches of the baddies! I certainly hope we will see more of Judex, and his famous cape, in subsequent episodes.