An important predecessor to “The Birth of a Nation,” this short movie by Edwin S. Porter was nowhere near as successful, but still offers some insights into the themes of early American Cinema. To understand its meaning today, a good deal of context needs to be filled in. 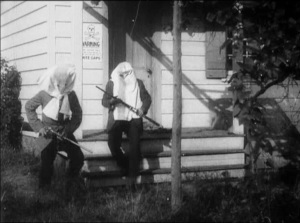 The movie begins by showing two men in awkward white hoods approaching the front of a house and tacking up a sign at the front door. The men are armed with rifles, and one keep a lookout while the other posts the warning sign. They depart, and shortly thereafter we cut to the inside of the house, where a lone woman glumly reads at a table. Soon, her husband comes home, apparently drunk. He is enraged by the sign and tears it down, then goes in and picks a fight with his wife, escalating to violence. A child runs out of the bedroom and distracts him long enough that she can escape his clutches, and we see them run across fields to elude him and ends up at another house, presumably the home of family or friends who give her shelter. The menfolk of this house become agitated, and several of them jump on horses to raise the alarm.

Soon, a group of men with white hoods like those we saw at the start grab the drunken husband and drag him, resisting, away from his house, into the woods. There, they bring him to a torchlit circle of men, all of whom put on their hoods when the man is brought to them (we see that they are ordinary citizens before their hooding). The man breaks and runs, and there is a lengthy chase through the woods. Finally, the man attacks a lone pursuer from behind a tree, possibly hoping to get his hood and escape in disguise, but he loses the fight and the other hooded men soon arrive and take him into custody. Then, his arms are tied and raised by ropes around a tree branch. Now that he is secured, the hooded men rip off his shirt and paint his upper body black, then throw feathers on him from bags. The final image is a grim procession of hooded men, leading the tarred and feathered victim, his hands tied, on the back of a mule. 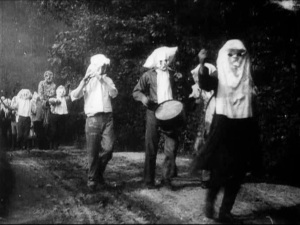 Before we get into discussing the obvious parallel, it is important to note that there was no active Ku Klux Klan at the time of the release of this movie. The book The Clansman, by Thomas Dixon, would also come out in 1905, and this would fire the imagination of men like William Simmons, who would re-found the Klan ten years later, the same year that “Birth of a Nation” was released.  This movie is, as the title makes clear, about “Whitecapping,” which was a form of vigilantism prevalent in the South and the West in the late Nineteenth and early Twentieth Centuries. White Caps were groups of citizens that took the law into their own hands, operating clandestinely with the help of masks, and enforcing community standards through the threat of terror. This form of vigilantism has roots in the mythos of the “holy Vehm” of Westphalia and other European traditions. None of which is to say that it has nothing to do with the KKK or racism. While race was not a central issue for the White Caps in the same sense as for the Klan, it certainly played a role in the standards the White Caps enforced, particularly in the South, where competition for scarce resources between poor whites and freed slaves and their descendants contributed to a culture of lynching. 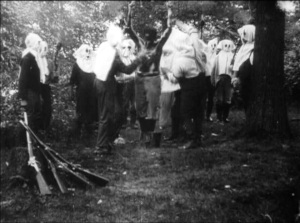 For us today, the vision of a lone man being pursued by hooded figures with torches is undeniably horrific, although that may not have been the impression the directors were seeking to convey. The victim in this movie begins as a villain, a drunk and a spousal abuser (we don’t see him hit the child, but child abuse would also be a logical extension of this character). The White Caps are therefore posited as a force for decency, even if what they do is unpleasant. It’s also worth noting that this movie is edited along the lines of other chase movies by Porter, such as “How a French Nobleman Got a Wife…” that are essentially comedic. On the “Invention of the Movies” DVD, scholars Charles Musser and Michelle Wallace offer some of the above context, and also emphasize that the tradition of popular vigilantism in the US led to some of the formative genres of Hollywood, including the Western. I would add that there is also a direct line to comic book superheroes, possibly one of the most profitable genres of the current decade. As we thrill at the current portrayals of extra-legal enforcement on the screen, it may help remember the less-glossy origins of the concept in order to maintain some awareness and critical distance from its more unpleasant implications.

In this third chapter of the “Judex” serial, things finally start moving, as the villains put their plans into action, an important cameo is seen, and the hero discovers that he actually has a mystery to unravel. Great tinting and moody lighting and makeup add to the effectiveness of the film. 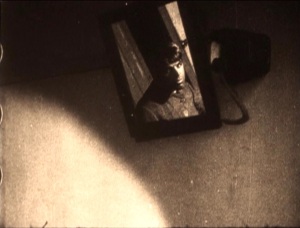 This chapter begins by establishing the revived banker, Favraux (Louis Leubas), as the captive of Judex (René Cresté) in his underground lair. The mirror in his cell follows him as he moves, and we learn that Judex and his brother can observe the prisoner through a hidden camera. When Favraux tries to disable it by putting his towel over the mirror, the towel bursts into flame! Judex uses a “flame device” to transmit a message to him: he has been spared from his death sentence by his daughter’s acts of decency, but now he faces lifetime imprisonment for his crimes. Meanwhile, that daughter’s estranged son Le Petite Jean (Olinda Mano) is plotting how he can see her. He sneaks out of his bedroom and onto the back of a truck covered in cabbages. The truck drives to a shop to sell its wares, but before the driver can begin to unload it, Bout-de-Zan sneaks up to steal a cabbage, inadvertently finding the stowaway and quickly referencing the first big hit of Louis Feuillade’s mentor, Alice Guy. He and Jean sneak away before being caught, and Jean shows him the letter from his mother, and Bout-de-Zan agrees to help him get to her. The two kids sneak onto the back of a fancy car bound for the right neighborhood, and manage to hang on without attracting attention all the way there! 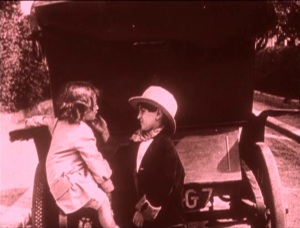 Meanwhile, Musidora has gotten to Jean’s mother (Yvette Andréyor) first. Although Yvette is under an assumed name, she advertised her services in the papers and Musidora has come in answer to that ad. Even though she should know better than to accept employment with a governess she previously discharged, Yvette gets into the car with her and her accomplice who, we remember, are still hoping to get the money that Yvette has donated to charity. They quickly capture her. But, Jean has arrived at the apartment, and is taken in by the maid, who shoos Bout-de-Zan away as an undesirable. Jean is sympathetic with the two pigeons who are caged in the apartment, and, when his mother does not come home promptly, he releases them. This was exactly the right thing to do, fortunately, because these are homing pigeons that return to Judex and inform him that all is not as it should be. He investigates, putting on a great black cape and bring a large mastiff with him. The dog is charmed by Jean, and Judex realizes that Yvette has been detained for some unknown purpose. But how? And how can he find her now? These answers will perhaps be addressed in the next installment.

This episode was short and worked well for me, not least because it ended on a kind of cliff-hanger, where we don’t know how the hero will manage to help the apparently helpless heroine. Bout-de-Zan is also a great treat to watch. He plays off the saccharine innocence of Jean by appearing to be the worldly-wise street kid (who still thinks children are born in the cabbage patch), and his outfit makes me think of a French Huckleberry Finn. When he and Jean are finally run off the car by the chauffeur, he refuses to leave until he’s had a chance to kick the man in the backside! I also really like the way Judex comes across in this movie. Finally, an interesting hero from Feuillade! His underground lair is marvelously shot and the mirror watching the prisoner is still creepy, even in an era where such surveillance is common. He also has a great look going with the hat, the cape, and the dog.