This short from Edison is a 3-shot movie that depicts a car chase from the point of view of the pursuers. It doesn’t hold up today as an especially effective narrative, but the camerawork may have excited audiences of the day.

A small child stands in the middle of a wide city street, waving her arm. A mounted policeman rides into the shot from in front of her, appearing to be the subject of her waves, but he suddenly dismounts and runs over, grabbing her and pulling her to one side. Then a car comes from behind camera, and leisurely cruises through the spot where she was standing. The policeman signals to others, who pursue the car while he pulls the little girl to the safety of the sidewalk.

The next shot is a tracking shot, apparently done by a camera mounted on a car, which follows two police bikes as they chase the automobile up a parkway to Grant’s Tomb. The police slowly close in on the car, whose occupants occasionally wave back at the cops. One fellow seems to try to beat them off with his top hat as they pass to cut it off. Finally, at the top of the parkway, the car stops with the two policemen in front of it. 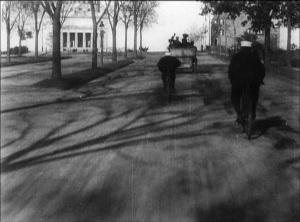 The next shot is from a stationary camera at a slight angle, showing the police questioning the driver and passengers, some of whom appear to be a bit drunk or belligerent. A policeman gets into the car and the driver prepare to drive off before the end of the movie – apparently they are coming quietly to the precinct. 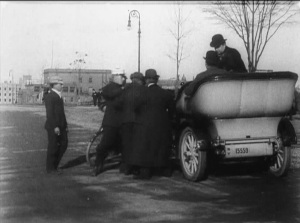 This whole chase never exceeds 35 mph, perhaps less, but by the standards of the time, it is still fairly exciting. The key is the sequence shot from the back of a moving vehicle, which allows the viewer to experience the chase as if they were pursuers. For an audience which only occasionally saw pans or tilts, this lengthy tracking shot was probably a pretty big deal (although note that travel films as well as “The Great Train Robbery” had included scenes shot from the top of railroad trains much earlier than this). With a live narrator filling in the gaps about how to read the reactions of the onlookers and the miscreants, this was probably good entertainment for the time.