This famous follow-up to “Life of an American Fireman” by Edwin S. Porter is a longer movie, but oddly less satisfying than its predecessor. Where that movie was an innovation in bringing sequential narrative to film, this one seems to lose its thread and becomes more a series of unconnected vignettes.

The opening scene parallels the original, by showing us a policeman off duty at home, with his wife and small child. The man sits at the table, reading his newspaper and smoking, while the woman tends to the needs of two very small girls. Meanwhile, a slightly larger boy marches around the table in his father’s police helmet, and carrying his belt and nightstick. After a while, father rises to leave and mother brings him his coat. He gives each of the children a kiss in turn, and retrieves his articles from Junior, before going out the door. After he leaves, the woman brings the children to the window to wave, although we can see pretty clearly that there is nothing but a studio wall behind it. Note that this policeman has no mustache.

The next shot shows the front of an urban police precinct. The doors open, and a large number of uniformed cops file out, representing the beginning of a work shift for the police force. The last two to depart seem to be partners, conversing about their work, and the younger of the two has no mustache and could be the man from the first scene. The next shot shows a lone policeman without a mustache approaching two small children on a stoop in front of a building. He picks up the smaller one, who seems to be in tears, and walks off. After a moment the larger girl follows, also wiping off tears. The next scene shows the policeman with the children on a busy commercial street. He stops at a fruit market and gets them some food. We then see a street-corner with heavy traffic. Pedestrians periodically dash between trolleys, and horse-drawn vehicles. A woman with a child seems to be afraid to cross until an un-mustached policeman takes her hand and escorts her across. We see that a trolley has stopped for the policeman and several other pedestrians take advantage of the gap to get through.

Suddenly, we cut to a dock on the Hudson River. A woman walks up and looks around, looking at first as though she will remove her clothing, but then suddenly diving fully clothed into the water. A man in a uniform (not a policeman) runs up and beckons to someone off-screen, then runs back. Now an un-mustached policeman arrives and throws off his helmet and belt, then dives in after the woman, who is still bobbing about on the surface. Several more policemen run up and form a chain, leaning over the dock to help pull the woman up a ladder. This process takes about three minutes. There is a quick cut to show an approaching ambulance with an excited little dog running alongside, and then we see the dock from a new angle, with the woman lying prone while several of the policemen hover around her. Two of them (with mustaches) pump her arms up and down, and eventually the ambulance pulls up. The ambulance driver takes over the pumping as a tugboat goes by in the background. The policemen help get the stretcher out and place a pillow on it before assisting the ambulance driver to lift the woman onto it and load her into the ambulance. The camera pans to follow them as they do this. Most of the police stay behind, but one, without a mustache and with no helmet on, climbs onto the back of the ambulance as it pulls away.

The next sequence is a chase to bring a runaway horse under control. The horse runs from a path onto the main road in Central Park and is nearly hit by an automobile. Then it takes off and runs past a couple of policemen in the park. One leaps on his horse (already in motion) and gives chase. This fellow is wearing a flat police hat, rather than the rounded helmets of the previous officers in the movie, and he seems to have a mustache. There are several shots of the chase, with the policeman finally catching up and grabbing the reins of the panicked horse, bringing it under control and allowing the female rider to dismount. Another mounted policeman rides up and helps secure the horse while the first one holds up the rider, who appears to have fainted.

Now there is an odd comedy sequence about two mounted policemen, both mustached, who return to the stables. One brings his horse inside while the other waits. Inside the stable, we see the first man put his horse into a stall, then he gets into a carriage while the workers hitch up two horses to it. Then the carriage drives past the waiting officer, who looks impatient as he waits for his partner to come out. The man stops the carriage a block or so away, then mounts one of the carriage-pulling horses and rides up from behind his friend, surprising him. They ride off together. The movie ends here. 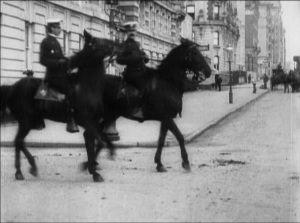 I tracked the mustaches to demonstrate where the narrative continuity of this film is broken, but in fact most of it is in long shot, so that it’s hard to be certain that the actors are the same from one scene to another, no matter whether they have mustaches or rounded helmets or whatever. It could easily be several films stitched together, all loosely about New York police officers, but it doesn’t follow “the life” of any single policeman in any sense. The opening sequence is fairly meaningless, which is surprising, because in “Life of an American Fireman,” Porter used the domestic scene of the fireman’s family to tie explicitly to his work as a rescuer. The suicide sequence, which eats up a good deal of the running time, is rather un-dramatic. There never seems to be much danger that the woman will drown, and the chain of men pulling her up the ladder just seems inefficient and time-consuming. The scene in Central Park is better in terms of action and excitement. We saw something similar in the 1910 movie “Police Force of New York City” and Charles Musser mentions an 1896 movie called “Runaway in the Park,” so the woman on an out-of-control horse seems to be a common trope of early cinema.

It is worth noting that none of the incidents portrayed show a police officer in the process of preventing a crime or attempting to catch a criminal. These policemen are helpers, rescuers, even protectors, but not enforcers. This may have to do with discomfort at depicting crime in American films at the time, something that would remain controversial right through the Hays Code, although of course movies like “The Burglar on the Roof” (1898) would happily break that convention for comedic purposes. Charles Musser, on the “Invention the Movies” DVD argues also that Porter’s “progressive” viewpoint comes through here: the city is a dangerous and uncaring place, but institutions like police can be a force for good in that context, by caring about the people they serve and working to help them improve their lot.