This short is a classic mix-up comedy based on the fact of two very similarly-named towns: Canaan, Vermont, and Canaan, New Hampshire, on the same train line. The thin plot does offer some good opportunities for situational comedy. 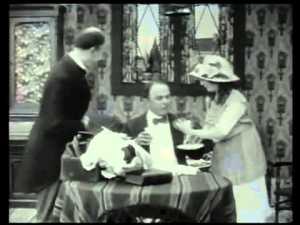 An out-of-work actor named Jimmy Fox (Victor Moore) is on the verge of committing suicide by breathing in gas from his light, when he is contacted by his agent and told to go to one of these metropoli in order to join a theater troupe. He boards the train with 3 donuts (one for every 100 miles) and a bottle of milk, stolen from his landlady. At the same time, the reverend John Fox boards the train for the other Canaan, where he is being sent to take over ministerial duties. Of course, they each get off at the wrong station, and, of course, each is mistaken for the other Mr. Fox. Of course, hilarity ensues. The reverend fairly quickly flees his Canaan community (apparently running home to his mother), when an actor in rehearsal pulls out a knife. But our actor figures out his situation fairly quickly and comes up with a plan. He begins his sermon by passing out the collection plates. Then, imitating Billy Sunday, he gives a dramatic series of gestures that cause the congregation to look into the distance while he fills his pockets. Then, he does a kind of strip show, pulling off his jacket, tie, and shirt, finishing with a flourish that makes the crowd look up while he bicycles out the door. However, he’s forgotten that by removing his clothes, he left all the money in his pockets behind. 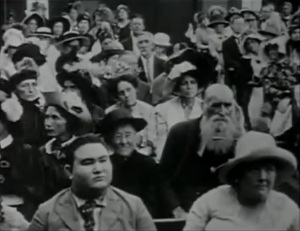 The now-obscure star of this movie was Victor Moore, who was the principle star of the Jacksonville, Florida-based Klever Komedies studio, a subsidiary of Jesse Lasky’s Feature Play Company, and therefore part of Paramount. Judging by this film, Moore wasn’t a genius of physical comedy, like Chaplin or Keaton, he seems to be more in the tradition of situational humor like John Bunny or Sidney Drew, with just a hint of Roscoe Arbuckle’s charisma. A lot of this film is shot quite conventionally, but there are some interesting bits. The sequence in which he tries to commit suicide with gas includes several bits where he breathes fire after someone lights a match. There are several dramatic close-ups during his sermon, and I was surprised that his parishioners seem to include at least a few Asian Americans. Honestly, the funniest moment for me didn’t involve Moore at all – I laughed loudest when the preacher runs away from the actor with a knife.