The Strenuous Life, or Anti-Race Suicide (1904)

This is a multi-shot short comedy by Edwin S. Porter for Edison Studios, that tells a story by implication, winking at and nudging the audience without ever being explicit, although it deals with childbirth, one of the more sensitive topics at the time.

The movie opens on a set designed to represent an office, which is shot for some reason at a very low angle, so that the actors only come to about halfway in the frame vertically when standing. A man is sitting at a desk, and his secretary (a woman) sits across from him. He receives a phone call that excites him greatly. He gets up to leave and almost puts on the woman’s hat by mistake as he leaves. She points out his mistake so that he is not arrested for cross-dressing. The next shot is a New York street scene. The streets are covered in snow, and a horse and carriage pulls up to the sidewalk, lurching over large piles of snow. The man from the previous scene gets out and runs up to a door. The camera pans to follow him – but a large older gentleman has gotten into the foreground and seems to be the center of action until he passes out of frame (he looks a little annoyed to be photographed, although I could be imagining this). Once our attention is back on the actor, we see that he is collecting someone from the house he has gone to, and they return together to the horse and carriage and drive off. 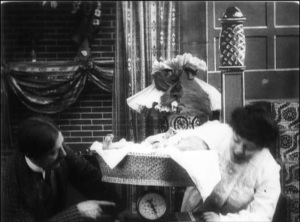 The next scene takes place at the man’s house, where he is greeted by female servants. The man he has brought with him carries the black bag of a doctor, and the doctor and servants go upstairs while the man remains below. After he has removed his hat and coat, he proceeds into a lounge, which also has a staircase leading up. He paces back and forth excitedly for a little while and then one of the female servants brings a bundle down to him. They put the bundle on a scale, and then a close-up reveals that it is a baby. They weigh the baby and the servant congratulates the man. He picks up the baby (the camera now returns to long-shot) and coos at the child. The servant runs back upstairs, and soon is back with another bundle. This repeats until there are four bundles being held by the man and his servants, and the man collapses on a chair and faints. The doctor comes downstairs to see to him, and when he wakes up he kicks the doctor for delivering quadruplets!

This is an awfully long walk to get to a simple punchline, but I liked it for a couple of reasons. One is that wonderful location shot of a New York street in winter. There isn’t a lot of early footage of wintry days in New York, and you can really see that the streets are covered in snow here. It appears that the passers-by are not extras, just real New Yorkers going about their day, and it apparently didn’t occur to Porter to make sure the actor would be at the center of the action in the pan. The close-up is effectively a jump-cut, but it’s nice to get a better look at the baby and the actors. I’m not sure that the baby was in any of the long shots, maybe the parents were concerned about someone dropping it with all the running around. The other good part is that you can see the joke about the four babies coming pretty early, but the final joke about the man blaming the doctor comes as a funny surprise that actually works to elicit laughs – or it did for me, at least.