Douglas Fairbanks is back with a parody of the Western genre that takes full advantage of his good-natured American good looks and propensity for athleticism. By this point, the Fairbanks comedy “brand” was clearly established and he was milking it for all it was worth.

Doug stars as Jeff Hillington, the spoiled son of a railroad magnate with an obsession for the Old West. We first meet Jeff having a breakfast of beans at a campfire in front of a tent, decked out in complete “Western”-style clothing, reading an Old West adventure novel. As the camera pulls back, we realize that this cozy scene takes place in his Manhattan apartment: He has set up the campfire and tent in his bedroom. He also does some target practice in his room, which prompts his father to send the butler up to remind him to get ready for the office. Doug is really rough on the old guy, roping him with a lasso, making him watch his trick shots from dangerously close to the line of fire, and finally jumping on his back and “busting” him like a bronco.

Doug goes in to work for his father, but doesn’t get much done because he’s too busy fantasizing about the West. He goes to a Nickelodeon to watch the latest Western movie, and tells a passing woman that “his mate” will have to be just like the girl in the poster. Meanwhile, dad is meeting with a delegation from the town of Bitter Spurs, Arizona, where a prosperous mining facility needs a new spur line added to facilitate transportation of the ore. Hillington Senior likes the idea in theory, but decides to send Jeff to look at the situation at first-hand. He also hopes that a trip to the real West will cure him of his obsession. Jeff thinks this is the most exciting idea he’s heard, and insists on calling all the delegates “pard” and commiserating with them that they have to wear “store clothes” when they visit New York.

This gives the city fathers of Bitter Creek an idea: They’ll impress this young fool by putting on a Wild West show just for him and pretending that nothing has changed since the 1870s. They cover up all their nicely-printed signs with handwritten boards (the “S” is always backwards) and turn the city assessor’s office into a Western Saloon. They get everyone to dress up like cowboys and plan out a dance, some rowdies for Jeff to confront, and a holdup for the climax. Meanwhile, the local Indian Agent (Sam De Grasse) has been skimming off the government assistance intended for a nearby reservation, and he learns that he will soon be exposed. So, along with his sidekick, he plans a real train robbery, using the Wild West show as a distraction, and plans for some of “his” Indians come into town to simulate an “uprising.” 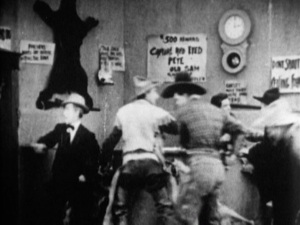 Jeff rides into town decked out like a true Urban Cowboy and immediately confronts a man harassing the one available single girl in town (Eileen Percy). The mining men realize that they need to get his guns away from him and put fake bullets in them, because he’s too eager to use them. They manage to do this while he’s washing his face in a basin in the hotel. Everything goes well, with Jeff consistently acting out the clichés of his fantasy, and the townsfolk laughing their heads off behind his back. They convince him that they need the spur in order to put Wild Bill and his Dirty Ditch outfit out of business. Jeff insists on walking the girl everywhere she goes for her own safety.

Then, the robbery takes place. Sam De Grasse shoots the conductor after he has indicated which strongbox has the real money in it, and takes it. The Indians pour into town and take over the bar, drinking excessively and demonstrating that their guns, at least, have real bullets. Much of the town’s leading citizens are held at bay, and in a nearby room is a collection of infants, brought in by the wives because they had to attend the dance. Jeff discovers that his bullets have been replaced when he tries to save the day, and the city fathers come clean. He leaps up to the ceiling, kicks a hole through so he can climb into his own room, and secures the boxes of ammunition he had packed for his vacation. Now armed, he and the townsmen are able to re-take the bar. Meanwhile, the Indian Agent’s henchman had kidnapped Eileen and taken her out to the range. Jeff jumps on a horse from behind and rushes off to save her. The townsmen also get on horses and herd the Indians like cattle. Jeff saves the girl, and sheepishly admits that all the trouble was his fault for being such a goof about the West. Then he rides off on the next train while Eileen sheds a tear.

Then an Intertitle tells us that a Western must end with a wedding, so of course the two principles are married. But where should they live? Eileen wants to live n New York and Jeff in Arizona. The final shot is a sort of reversal of our introduction to Jeff: we see the finely-appointed foyer of a mansion, with liveried servants waiting to serve. Jeff and Eileen come down the stairs together and kiss, then they open the doors onto the rough desert terrain, and a group of rowdies on horseback greets them as Jeff mounts his horse to ride the range. 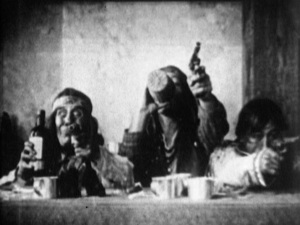 This movie captures a lot of the fun of Douglas Fairbanks in a simple package. It also reminds me of the kind of thing Harold Lloyd would later do: the good-natured nebbish who doesn’t quite live in reality, but makes good and gets the girl in the end. I think it’s actually a bit funnier when skinny Lloyd does this than buff Fairbanks, but Fairbanks did it first. This movie definitely has its funny moments. I particularly enjoy the early sequences in New York with the butler, but Jeff’s efforts to “fit in” to the Western town are also quite good. That said, I wouldn’t call it perfect. In terms of comedy, a lot of the humor is dependent upon funny Intertitles, which I find distracts from the visual action. Most silent movies tried to minimize the use of titles and show as much as possible visually, but, perhaps because they wanted to preserve the witty writing of Anita Loos, they overdid it a bit here. The other “not funny” part of this movie is the stereotypical portrayal of Native Americans. This is mostly a problem in about the last ten minutes of the movie, but it gets really bad when they take over the bar and drink heavily, threatening the white citizenry and their babies. According to Wikipedia, these scenes were frequently censored even at the time.

It’s interesting to note that this movie was actually shot in Fort Lee, New Jersey, which was still a major filmmaking center in 1917. This would have made the New York scenes easier. In fact, there’s one scene of Jeff riding his horse in Central Park South that couldn’t have been shot anywhere else. But, it must have made the Western town and countryside a bit of a challenge. We don’t get any sweeping panoramas of the desert, but those weren’t common at the time even in Hollywood films, partly because of the limitations of cameras and film stock. The town itself is quite good, and we do get some impressive long shots to establish it that work well.

The real point of the movie is that it parodies the clichés of an established genre, especially the style of Western favored by Broncho Billy Anderson and other kid-friendly fare. Loos and Fairbanks obviously saw that these tropes were ripe for satire, and they went at it with both barrels. This movie is important historically for what it tells us about the development of that genre.

You can watch it (no music) for free: here. It can also be rented for download (with music) from Flicker Alley on Vimeo.