The director’s craft developed over the years of early film at a remarkable pace, so that directors working in 1916 had already achieved a high standard of sophistication and ability. Directors had already come to see themselves as creative artists, as being responsible for coordinating the technical talents of their crew into a single vision They were also the one objective eye watching over the actors, coaching them when performances gave too much or too little. Directors might even see themselves as the final “author” or authority on a film, even though the producers often used economic power to make decisions beyond the control of the directors who worked for them. In this category, we assess the artistic talent of the directors of the year 1916.

Evgeni Bauer was last year’s winner, and his movie “A Life for a Life” has been honored this year with multiple nominations. It shows his talent for mise-en-scène and working in multiple dimensions, and also made a major star of its lead actress, Vera Kholodnaia, this years Century Award winner for Best Actress. His countryman Yakov Protazonov is less well-remembered today, but contributed an interesting entry with “Queen of Spades.” This is the second (known) take on the famous Pushkin story in film, and deals interestingly with the transition between time periods in alternating flashback and “modern” storylines. First-time director Marion E. Wong directed her own screenplay in “The Curse of Quon Gwon,” a story about Asian American immigrants told from their side that still seems original and interesting a hundred years later. She showed her talent for sensitive storytelling as well as good instincts for the cinematic art in this long lost film. Cecil B. DeMille has yet to take home a Century Award, although he’s been nominated each year since I started. His depiction of the life of Joan of Arc in “Joan the Woman” shows how far he’s come in the time since he gave us “The Squaw Man” as his freshman effort. Finally, Charles Swickard and William S. Hart co-directed Hart’s highly effective vehicle, “Hell’s Hinges.” Hart took home the award for Best Actor on that one, can he also manage to win as half a director?

The nominees for Best Director of 1916 are:

And the winner is…Cecil B. DeMille! 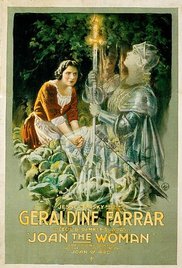 I think DeMille’s work is among the best that Hollywood offered in this period. Last year, although he didn’t win the director award, his movie “The Cheat” won as Best Picture, not least due to his direction. Today, DeMille is mostly remembered for grand spectacles like “The Ten Commandments,” but he tried a little of everything in his early years, and that’s part of how he became such an effective showman. In “Joan the Woman,” he fictionalizes enough of the story to hold human interest in a person few can really identify with – a saint and a martyr. The movie is enormously effective and displays the skill he quickly honed by jumping right into feature production in 1914.