This comedy directed by and starring Roscoe (Fatty) Arbuckle is also an early vehicle for Buster Keaton, who plays his spoiled and immature son. While a bit rough around the edges, there is some good physical and situational comedy here. 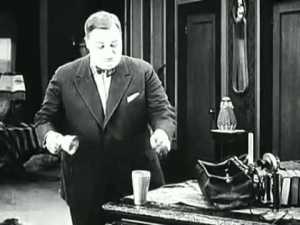 The movie begins with Arbuckle and his family arriving at the racetrack in their car. Arbuckle puts down an anchor when he parks, and abuses Junior every time he tries to speak. Shortly thereafter, the Vamp (Alice Mann) drives up with her beau, Al St. John. Al gets his jacket caught in the door of the cab and is dragged through a mud puddle as a result. Meanwhile, Alice flirts with Arbuckle, who we now learn is a doctor who needs cash. He tricks his wife into letting him sit near the Vamp, and overhears Al getting a “hot tip” on a horse, so he bets all his money on it. Of course, the horse is a dud and runs the wrong way. His wife is very angry at him for losing their money, and they go home while Buster laughs about “the funny horse that ran the wrong way.”

The Vamp and Al now formulate a plan to get the expensive necklace they saw Arbuckle’s wife wearing. She calls him and says she has swallowed  can of shoe polish, so Arbuckle agrees to make a house call. Along the way, he sees a man selling a “miracle soap” that will prevent all illness. Worried about losing business, Arbuckle sets his car on automatic and sends it plowing through the crowd, then hands out business cards to the injured spectators. He whistles and the car obediently returns like a dog. Then, he finally goes to the Vamp’s apartment, where he fixes martinis for both of them from the supplies in his doctor’s bag.

Meanwhile, Al has appeared at Arbuckle’s house pretending to be a patient, and is able to steal the necklace from around the wife’s neck without her noticing. Buster sees him getting away, though, and follows him back to the Vamp’s apartment, calling his mother and letting her know what has happened. Now, Al and the Vamp have to get Arbuckle out of the house, so they send him to a bookie with another hot tip. He puts in the bet, but then goes back. There is a series of comedic close-encounters as Al avoids Arbuckle, Arbuckle avoids his wife, and the wife tries to get back her necklace. Then Arbuckle finds a police uniform in the kitchen and puts on a false mustache, using it to intimidate Al and retrieve the necklace. At this point, Buster shows up with several more policemen, and Arbuckle bluffs his way past them by pretending to arrest his wife. Then he tries to collect his winnings from the bookie, but they all run away at the sight of his uniform. He takes his money anyway, but his wife gets the last word.

Contrary to his “Old Stoney Face” standard of later years, Keaton in this movie emotes with powerful facial expressions, laughing uproariously and bawling at the slightest provocation. The comedy is a bit more “situational” than most of what we associate with Keaton and Arbuckle, but they both get in plenty of pratfalls as well. Keaton, in particular, does an impressive tumble backwards over a table to land comfortably in a chair. I suspect that Arbuckle (who directed) had told him to cry so frequently, thinking that it would be good comedy, but I found that it made the relationship seem more abusive and less funny. Overall, I wouldn’t rate this as the best work either actor has done: I spent a lot of it waiting to see what Keaton or Al St. John would come up with next. The biggest laugh Arbuckle got from me was when he started handing out business cards to the people he had injured. 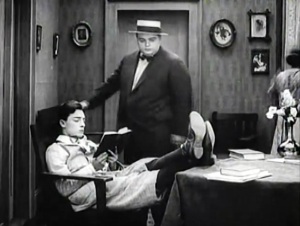 This year marks the 100th anniversary of Buster Keaton’s entry into film comedy, and this blog post marks my entry into the “Buster Keaton Blogathon,” which has been running now for three years. For the next few years, we’ll be able to track Keaton’s development, as we have with Chaplin over the past few. He definitely showed physical ability and screen presence right from the moment he got started, even if he honed and refined his talent as he gained experience. I’m looking forward to getting to know Buster as this project develops.

Now go  check out the other entries in the Blogathon!