Comparable to the British documentary, “The Battle of the Somme,” this film shows the conditions of Canadian troops at the front during a critical battle in France. Taken together, these two films demonstrate a new sophistication in documentary technique, and in the appreciation their governments had for the importance of domestic propaganda in wartime.

The film is subtitled “In Action with Our Canadian Troops,” although the information provided by Library & Archives Canada suggests that there is a second part, “Footage on Ypres, 1914-1917,” which I was unable to find separately – I think some of that footage has been edited in to this. The movie begins by showing us some troops on parade with the flag presented by Princess Patricia of Connaught, the daughter of the Governor General of Canada. We see various march-bys. Many of these troops appear sullen or uninterested in the camera, though there are a few smiles and glances. Soon, we get to the main feature of the narrative, which follows the Battle of Vimy Ridge, a three-day battle in northern France which involved four divisions of Canadian troops. There is an animated map which shows the progress of the battle, connecting the footage on screen with events known from the newspapers in the audience’s mind. In fact, it is likely that some of the footage was staged or taken at some time other than April 9-12 (the duration of the battle). We don’t see any real combat, which would probably have been much too dangerous with the cameras of the time, although there are images of artillery firing and explosions far off across the battlefield. A lot of the footage is men walking through waterlogged trenches or marching and/or digging in the mud. The conditions look extremely uncomfortable and probably unhygienic. One pan across a group of men crouching in the cover of some trees shows them all duck suddenly; the Intertitles tell us that shrapnel exploded overhead at that moment. I suspect this was staged, but it does help to establish the sense of imminent danger on the frontlines. The film takes us through the successful advance of the Canadians and “digging in” their new defensive line. We see some of the “trophies” (captured artillery) taken, one of which has a lengthy sign explaining that it has been requested by the unit that took it as a trophy. The movie ends with an apparently unrelated image of a tank rolling through a field, probably on experimental maneuvers.

There are some interesting differences between this movie and “The Battle of the Somme.” I mentioned above that the troops seemed unexcited about being filmed – in “Battle of the Somme” the men frequently waved to the camera and all seemed very hopeful that they would be seen and recognized. One had the sense that the troops shown here were veterans, inured to the dullness of military service, and more interested in their next meal or rest period than in the camera. However, unlike the Battle of the Somme, the Battle of Vimy Ridge was a pretty clear Allied victory, in which the stated objectives were achieved successfully in a few days, rather than a months-long stalemate and meat grinder. We see less of headquarters and officers in general, focusing on foot soldiers and artillerymen at work. We also see no Germans, even as prisoners, and no dead bodies. While this is a somewhat bleak portrayal of the conditions of war, it avoids anything shocking, perhaps due to responses in England to “The Battle of the Somme” the previous year. I found the inclusion of the animated maps very useful in giving an interpretation of the mostly pretty ordinary military footage, and I liked how they cannon fire was shown to flash across the screen as the little triangles and dots representing the armed units advanced. 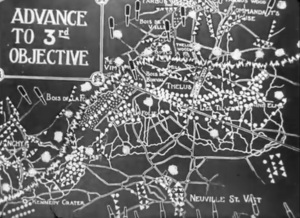 There is a tendency to overlook the important contributions of Dominion forces in both the World Wars, reflected by the ease with which people will speak of “England” or “Britain” (or worse, “one tiny island”) as being at war with “Germany.” Soldiers came from nearly all points of the world to participate in the confict, and understandably wanted to be remembered and represented for their sacrifices. This movie at least preserves a part of that heritage for Canada, a country which was involved in the First World War from the outset, and their men had been at the front for almost three years by the time any soldiers from the USA arrived on the scene. This movie helps us a hundred years later to appreciate that the second-largest nation in the world made its own contribution to a struggle that may have centered in Europe, but was truly global in reach and implications. 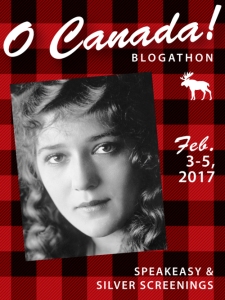 This has been my contribution to the “Oh Canada!” blogathon, being hosted by Speakeasy and Silver Screenings. If you liked this post, take the time to check out some of the other entries!

You can watch it for free: here (no music). Thanks to Library & Archives Canada for making it available to everyone!