This short narrative film from Edison comes one year after “The Great Train Robbery,” and is also directed by Edwin S. Porter, but it shows little of the promise of that exciting blockbuster. Instead, a few clips of travel footage are edited together with rather creaky studio shots to construct a not-terribly-funny comedy about an American tourist abroad. 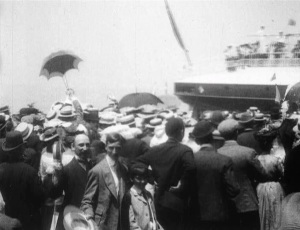 The movie begins by showing us a gangplank onto a (real) steamship preparing to launch. A porter carries some bags aboard, and then we see the protagonist of our story, a humorously overdressed man with large sideburns and wearing a deerstalker cap. He is accompanied by a young woman in a hat which shades her face, making it invisible to the camera, and an older woman in a darker dress. He waves goodbye to someone off camera, and then kisses each woman and hugs them as they see him off. The camera pans a bit to follow them up the plank. The next shot shows a crowd seeing off an ocean liner, which we are meant to assume the fellow is aboard, although we do not see him. One of the well-wishers, who looks a lot like Georges Méliès, turns and looks at the camera, then resumes waving his hat as the ship sails by. We then cut to a panoramic view of lower Manhattan from the Hudson, taken from a moving ship. For people interested in the history of New York, this may be the best part of the movie: we see the buildings and piers in the Battery area quite clearly. The next scene is labeled “Dropping the Pilot” and it shows a ladder hanging off the side of a stationary boat. Eventually, a fellow in a rainjacket descends the ladder and a small rowboat pulls up alongside. He climbs in and they row off while he’s still standing there. I half-expected him to fall in the water! The camera pans to show us the rowboat rowing safely away, however. 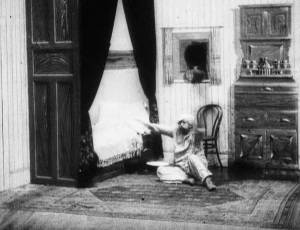 The story gets underway with “The Storm,” which shows, first, the bow of a ship going through rough seas and the spray from the waves splashing on the deck. Then, we cut to a shot of our tourist’s cabin rocking back and forth. He pantomimes getting sick and crawls into bed. Then his porthole breaks open and water splashes on him. He tumbles to the floor, narrowly missing his basin, and tries to swim on the floor. The next scene is “Kissing the Blarney Stone” and it takes place on an obvious set. The tourist arrives with a small tour and a couple of rough local fellows offer to hold his feet while he leans over the precarious edge of a wall on Blarney Castle. Predictably, they dump him once he’s over the edge. In “Doing Paris” we see our tourist in a café, where he meets some young women and orders wine. An artist-type glares at their display from the corner while the tourist gets drunk and joins them in a can-can. Eventually some of the snooty women from the tour group find him and drag him back to his chair. The French women continue acting wildly until the waiter kicks everyone out. Then, in “Climbing the Alps,” we see a very unconvincing mountain set. When the tourist begins to climb the tall part to the right of the screen, he quickly falls backward and off a cliff in the back of the set. Two mountaineers pull on the rope he was attached to and bring him back up, looking a bit worse for wear. They give him a glass of something to help him recover. 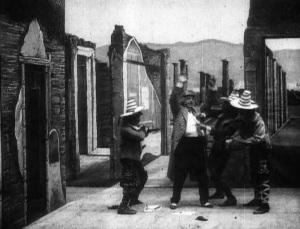 Next comes “Hold Up in Italy,” whose title spoils any suspense about what might happen when we see the tour group walking through Roman ruins on another obvious set. The group leaves our protagonist behind, and three ruffians in very silly hats hold pistols to him while going through his pockets. The group returns to find him shaken but unharmed. In “Climbing the Pyramids in Egypt,” we get a set that shows the lower end of a pyramid with a Sphinx backdrop. A woman in rather long skirts is able somehow to ascend, but of course when our star goes up, he quickly tumbles back down again. Two fellows in turbans come back down to check on him too late. At last, he goes to “Mud Baths in Germany,” the only really restful activity he has engaged in. Actually, nothing especially untoward happens here. A couple of men smear mud on him and then splash him with buckets of water to clean him off. He does try to swim in place again when he gets wet. Finally, in “Home Sweet Home,” we see him assisted to a waiting horse and carriage by his servants, wife and daughter. He seems barely able to walk after the “cure.” 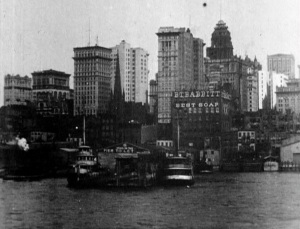 Although I don’t consider this one of Porter’s greatest successes, there are some interesting things going on here. For one, this is an interesting combination of “actuality” footage with staged studio material to produce a narrative. We also see this in “Life of an American Fireman,” where actual footage of firemen rushing to a fire was combined with staged images of the rescues they would perform. Having recently reviewed “The Immigrant,” which is famous for the lengths Charlie Chaplin went to in order to produce the rocking-boat effect on camera, I wondered what similar techniques Porter used to get a similar effect here. It also reminded me that I’d seen this even earlier, in the Méliès film “Between Calais and Dover.” Obviously, the comedic potential of rocking ships was a common theme in early film! Chaplin managed to coordinate more actors and stunts than the others, however, to say nothing of his superor comic timing. There is a bit of camera movement here as well, and although I wasn’t impressed with the set design, they certainly did build quite a lot of them, to simulate the tourist’s movements throughout the Old World. Finally, it’s interesting to note that as staged as it looks, some of this is realistic for the time: tourists really did climb the pyramids in those days, and the Blarney Stone lacked any safety bars.