This month’s Century News is a bit late, due to distractions and the US election of the present year. The biggest news of 1916 for Americans was also a Presidential election, but there was plenty of other news for the headlines of that month as well, including the end of the bloodiest battle of World War One in Europe.

Map of allied progress in the Battle of the Somme.

Douglas Haig ends the British and allied offensive in the Somme, ending the Battle of the Somme on November 18. Each side has lost about half a million soldiers, and the allies have advanced nearly six miles along a wide front, although the keys cities of Péronne and Bapaume remain in German hands.

Hospital ship HMHS Britannic, designed as the third Olympic-class ocean liner for White Star Line, sinks in the Kea Channel of the Aegean Sea after hitting a mine on November 21. 30 lives are lost. At 48,158 gross register tons, she is the largest ship lost during the war.

On November 23, Bucharest, the capital of Romania, is occupied by troops of the Central Powers.

In Russia, liberal politician Pavel Miliukov delivers his “Stupidity or Treason” speech to the State Duma on November 1, contributing to the downfall of the current government and drawing attention to the powerlessness of the Duma in the face of an increasingly revolutionary public.

Woodrow Wilson narrowly defeats Charles E. Hughes to retain the White House on November 7. “He kept us out of war” was used to apply to his policy regarding both Mexico and World War One (although the US had been militarily engaged with the former, and would soon be in the latter).

Republican Jeannette Rankin of Montana becomes the first woman elected to the United States House of Representatives, also on November 7.

Prime Minister of Australia Billy Hughes is expelled from the Labor Party on November 13 over his support for conscription.

Funeral for a worker killed in Everett, Washington.

An armed confrontation in Everett, Washington, between local authorities and members of the Industrial Workers of the World results in seven deaths on November 5. The Everett Massacre will also lead to the prosecution of several Wobbly leaders, although the charges are dropped in 1917.

The Kingdom of Poland (1916–18) is proclaimed by a joint act of the emperors of Germany and Austria on November 5. It exists as a puppet state of the Central Powers, which now occupy much of Polish territory. 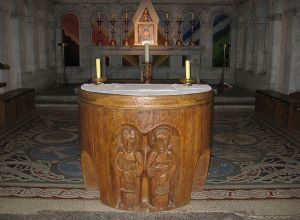 The altar in Honan Chapel.

Honan Chapel, Cork, Ireland, a product of the Irish Arts and Crafts movement (1894–1925), is dedicated on November 5.

Radio station 2XG, located in the Highbridge section of New York City, makes the first audio broadcast of presidential election returns on the night of November 7-8. It is estimated that 7000 people listened to the broadcast.

Samuel Goldfish (later renamed Samuel Goldwyn) and Edgar Selwyn establish Goldwyn Pictures on November 19. The studio is later to become one of the most successful independent filmmakers and eventually forms part of MGM.

Evelyn Keyes actress (Suellen O’Hara in “Gone with the Wind” and also in “Before I Hang” with Boris Karloff), November 20.

Emperor Franz Joseph I of Austria dies of pneumonia at the Schönbrunn Palace, Vienna, aged 86, after a reign of 68 years, on November 21, and is succeeded by his grandnephew Charles I. His own son, Rudolph, had committed suicide with his mistress in 1889.

Writer Jack London dies of kidney failure at his California home aged 40 on November 22. As early as 1908, D.W. Griffith had adapted “The Call of the Wild” to film, and many other London works would be made as movies through the century to come.