This chapter of “Les Vampires” continues the cycle of capture-and-escape without doing much to advance the storyline, although it includes some references to earlier work of Feuillade and his mentor, Alice Guy-Blaché. The title as well as the plot seem to flirt with horror tropes, without actually becoming a horror film as we would understand the concept now. 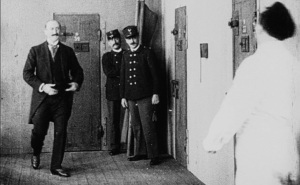 At the end of the last movie, the Grand Vampire (Jean Aymé) and Irma Vep (Musidora) had managed to elude capture and rob the spoils of their “colleague” Moréno (Fernand Herrmann), while he was arrested. At the outset of this episode, Moréno is being interrogated by the magistrate when he produces a pill and announces that he’d rather die than go to prison. He takes the pill, and a doctor pronounces him dead without an examination after hearing the magistrate describe what happened. The “body” is moved to a holding cell until the morgue attendants can come pick it up, and of course Moréno gets up and cold-cocks a guard in order to escape.

The heroic Mazamette (Marcel Lévesque) is up late at night watering his plants when he sees Moréno and his lackeys go into a nearby warehouse. He has the presence of mind to take a piece of clay to make a mold of the lock of that warehouse, just in case he ever wants to sneak around in there. Meanwhile, the intrepid, tepid Philippe Guérande (played by, yawn, Édouard Mathé) pauses in his writeup of the escape to look out the window, and is suddenly hooked around the neck and pulled down to the street below, where a gang of Vampires put him into a wicker basket with a Gaumont symbol on the side. He waits until they place the basket near some stairs, then tips it over and tumbles down to another street, where some good Samaritan passers-by open it and free him. He discovers the name of the costume company that rented the basket on another side, away from the Gaumont symbol.

In investigating that company, he finds that the basket was rented by a Baron de Mortesalgues, yet another alias of the Grand Vampire. Unfortunately, Moréno was also present at the costume company, since he needed some phony police uniforms for another heist, and he takes advantage of the opportunity to nab Guérande and drags him back to the warehouse. He tells Guérande that he’ll let him go if he gives him a way to get revenge on the Grand Vampire for stealing his stolen loot, and Guérande tells him the Baron’s identity. Once Moréno leaves, Guérande is quickly rescued by Mazamette.

The Baron is having a big society do for his “niece,” who is actually Irma Vep. They dose the guests with sleeping gas and emerge with other members of the Vampires in full costume to loot their wallets and jewels. However, Moréno is able to jump on top of the getaway car and throws the luggage containing the loot off the roof, then jumps off himself, and goes back to collect it all. Mazamette visits Guérande and accuses him of being “too honest,” (after flirting shamelessly with the maid – careful Mazamette, we know you have a wife and children!) but Guérande shows him a quote about focusing on the end result and Mazamette agrees to continue the fight.

Good thing we wore masks so none of these sleeping people can identify us!

The beginning of this episode was like a less-interesting version of “The Murderous Corpse” with Moréno substituting for Fantômas. Even the prison set is identical. I’m not sure why it was necessary to bring in a second master criminal for this series – perhaps because the hero was too bland? It seems to distract from focusing on the Vampires, and this episode has far too little of Musidora as a result. We do get a good amount of Mazamette, however, which is a consolation, and I love the little pantomime Lévesque performs to make certain we understand that he’s copied the key. The sequence with Guérande in the basket reminded me of “The Drunken Mattress” and other surreal comedies by Alice Guy where a person is trapped in an inanimate object which seems to develop a life and personality of its own.

Obligatory-but-admittedly-silly-logic-department: In this movie, we are led to believe that the Grand Vampire can convince half of the wealthy people in Paris to attend a party for his alias’s “niece.” Either he has somehow found time to build an identity and attend social functions for years in order to lure them to his home and rob them of whatever they brought with them (really a pretty petty theft) OR he was able to con them just by putting the word “Baron” before a name. Also, in this movie, we see Guérande pulled down from his apartment one story to the ground below, but in “The Red Cryptogram” we saw Musidora and the Grand Vampire escape out that same window to the rooftops of Paris, quite a bit higher up than a single story. Which is it?