Another Job for the Undertaker (1901)

This early short from Edison Studios is another early comedy from Edwin S. Porter, but it draws heavily from another of the icons of early film: Georges Méliès. It’s something of a remake, or maybe a parody, of his movie, “The Bewitched Inn,” only with a surprise punchline at the end. 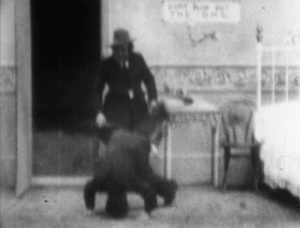 We see a set dressed as a hotel room with a sign reading “Don’t Blow Out the Gas.” A man is shown into the room by a boy in a bellhop’s uniform, but instead of caging for a tip, the boy does a somersault. Partway through the stunt, he vanishes! The man looks confused, but he begins arranging his hat and coat and umbrella, each of which disappears when he puts it down. He takes off his boots and they proceed to walk away from him, disappearing when he tries to grab them. He finishes preparing for bed and climbs in. Suddenly the film cuts to an image of a hearse in a funeral procession.

In traditional film histories, Porter is often given credit for “inventing” parallel editing. Whether that’s strictly true or not, he definitely was among the early experimenters in creating meaning by juxtaposing film of different scenes, and the ending of this film appears to be one of the earliest examples. If the imdb version of the Edison Catalog entry for this film is accurate, the audience is to understand that he has blown out the gas and thereby caused his death. It’s a fairly clunky edit, and ending, but that’s to be expected in an early experiment. Otherwise, the movie closely parallels its apparent source, “The Bewitched Inn,” except that the effects aren’t as good and the physical performance is less amusing. I still think it might be a kind of spoof, in that Porter seems to be using the audience’s expectations that it will follow the same storyline as a deliberate misdirection to make the ending more effective. It’s worth noting that Méliès himself remade this movie repeatedly, including in the 1903 film “The Inn Where No Man Rests,” and that many of his trick films dealt with much the same theme of a person in a room having objects suddenly disappear or appear. In the early days of cinema everyone remade each other’s successful movies, so it’s not really fair to accuse Edison or Porter of being unoriginal, but this doesn’t quite stand up to Méliès’s version.