An early narrative short from Edison Studios, this film seems to have comedic intentions. While it’s too short to give a developed plot or characters, it shows that expectations of some kind of story were beginning to develop quite early in cinema. 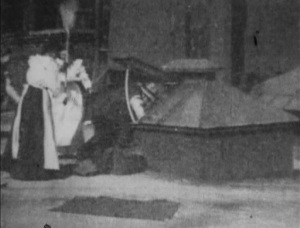 We see a man hunched over a skylight, removing coats and other objects. Two women walk up from behind him and one begins swatting his bottom with a broom. He falls to his knees, and then some men rush up and engage him in fisticuffs. At first, he acquits himself well, but his opponents overwhelm him and the woman continues hitting him with the broom while he is held in place.

I’d call this movie an early example of slapstick, since it relies on simulated violence for its humor, although it is not reliant on difficult or dangerous stuntwork to make this point. The audience presumably is meant to get pleasure from seeing the burglar get his comeuppance and there is a “vulgar” element in that he is hit on his behind by a woman at first – hardly noticeable today, but far from “proper” in the nineteenth century. It’s worth noting that Alice Guy was also making movies about burglars on rooftops the same year, although I  don’t know for certain which came first.