This short film from Edison studios takes advantage of New York location shooting and the cooperation of the Central Park Police Force to create a “dramatic” effect very quickly. 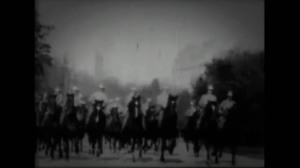 We see a road in Central Park, apparently facing south near the bottom of the park. A troop of mounted police gallop from a distance toward the camera, charging past a carriage going in the other direction and then stopping within a few feet of the camera. They halt and look into the camera for a few seconds before the end.

It’s hard to be certain exactly where this was shot, both because the area has changed and because the background is washed out and blurry on this print. That could be a result of damage to the film or just the limitations of the camera and film of that time. It appears to be near Central Park South, but I’m not sure. The policemen all wear Keystone-Cop-style rounded helmets and all seem to have full mustaches. No doubt it was easy enough to get them to spend a couple of minutes making the movie, and they may have been excited to be involved in a technological wonder like moving pictures. This was probably as thrilling to audiences as seeing trains coming at the camera, and the opportunity to see police on parade may have also been an appeal.